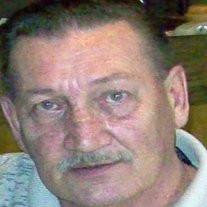 William E. "Bill" Dobis, 68 of Lorain, passed away Wednesday, June 5, 2013 at his residence while under the care of Cleveland Clinic Hospice following a short illness.
A life long resident of Lorain, he was born March 15, 1945 to the late Joseph and Virginia (Nee Klukovich) Dobis. Bill graduated from Lorain Admiral King in 1963 and attended John Carroll University.
In 1968, Bill began building homes in the Lorain area until he took the job as building inspector for the City of Lorain in 1978. From 1990 until his retirement in 2008, Bill served as Zoning Officer for the City of Lorain. He was a member of the North Central Ohio Building Officials Association, and served as secretary of the city of Lorain planning and zoning board of appeals. He was also a member of the National Rifle Association.
Bill enjoyed playing the lottery, shooting, carpentry, fishing and hunting.
He is survived by his wife of 25 years, Eleanore K. (nee Reising); his son, William "Billy" (Sharon) Dobis of Sellersburg, IN; a daughter, Denise Velez of Lorain; step sons, Jeffrey (Debbie) Scott of Medina, Benjamin (Andria) Scott of North Olmstead, and Richard Scott of Amherst; a step daughter, Jennifer (Ken) Faria of Lorain; 10 grandchildren and 3 great grandchildren; sisters, Marcia E. Stahl and Kathleen M. Dobis both of Lorain; and a niece and a nephew.
The family will receive friends on Sunday from 2-4 and 6-8 pm in the Dovin Funeral Home, 2701 Elyria Avenue, Lorain, where a memorial service will be held at 8:00 pm. Mr. Paul Heise, Deacon of St. Joseph Catholic Church, Amherst will officiate.
To send online condolences go to www.dovinfuneralhome.com.
To order memorial trees or send flowers to the family in memory of William E. Dobis, please visit our flower store.