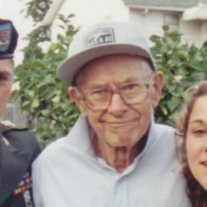 Wasyl "Willie" Nazar, age 94, of Lorain, passed away on Friday, August 30, 2013 at the Ohio Veterans Home, in Sandusky.
He was born on January 14, 1919 in Ford City, PA, and lived in Lorain his entire life. He was a graduate of Lorain High School and then proudly served in the United States Army. He earned the rank of Sergeant while he served from 1942 until 1945, where he was a machine gunnist on a tank.
Willie was a member of St. John the Baptist Ukrainian Catholic Church, where he coached the boys baseball team. He was also a member of the P.A.C.C. He was employed at US Steel, where he retired from after many years of working there.
Willie was quite proud of the numerous trees he had planted on his own around the gazebo at Oakwood Park. His love of nature and trees was known by everyone who were close to him. He was also known for his love of the Cleveland Indians, holding season tickets for much of his life. When he wasn't watching the Indians, Willie would enjoy gardening, dancing, listening to music, being involved in politics, and meeting with the Golden Agers Club members. In his younger years, he won many awards for bowling.
He is survived by his son, Conrad, 2 grandchildren; Nicole Nazar Markus and Conrad, Jr., 7 great grandchildren, a brother, Theodore, and 2 sisters; Mary Farkas and Anna Hallet.
Willie was preceded in death by his wife of 35 years, Rosemarie (nee Howard), in 1984, daughter, Karin Nazar, and his parents; Nestor and Katherine (nee Sykuta) Nazarkiewicz.
The family will receive friends on Sunday, Sept. 8, from 2-4 and 6-8 pm, in the Dovin Funeral Home, 2701 Elyria Avenue, Lorain. A Parastas will be held at 7:00 pm. Funeral services will be held on Monday at 9:30 am., in the funeral home. A Divine Liturgy will follow at 10:00 am, at St. John Ukrainian Catholic Church, 3038 Charleston Avenue, Lorain. The Very Rev. Canon Steven M. Paliwoda, Pastor, will officiate. Burial will follow in Calvary Cemetery, Lorain, with full military honors.

To order memorial trees or send flowers to the family in memory of Wasyl "Willie" Nazar, please visit our flower store.