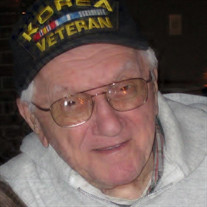 Vincent R. Panzel, 82, of Lorain, passed away Sunday, October 26, 2014 at Anchor Lodge Retirement Village, Lorain, following a lengthy illness.
Born December 17, 1931 in Lorain, he lived in Lorain his entire life. He served in the US Army during the Korean War.
Vincent retired from Ford Motor Company, Lorain Assembly Plant after 28 years. He also had owned and operated several local barber shops and also ran a TV repair shop. Prior to this, he worked at Fruehauf Trailer Company.
He was a member of the United Auto Workers Union Local 425. Vincent enjoyed spending time with his family, especially Sundays as he watched the Cleveland Indians and Browns and "chewed the fat". He also loved his pets.
Surviving are his sons, Kenny of North Ridgeville, David of Sheffield Village, and Ronny of Jacksonville, Florida; a brother, Edward (Mary) Panzel of Mansfield; many grandchildren, nephews and nieces; and a brother in laws, Charles Kapalin of Lorain and John Sklenar of PA.
He was preceded in death by his parents, Vincent and Bertha (nee Bodnar) Panzel; and sisters, Marian Sklenar, Julie Teamen, Dorothy Rote and Elaine Kapalin.
The family will receive friends on Wednesday from 6:00 - 9:00 pm in the Dovin Funeral Home, 2701 Elyria Avenue, Lorain. Funeral services will be Thursday at 11:00 am in the funeral home. Robert Dybo, Deacon of Nativity of the Blessed Virgin Mary Catholic Church, will officiate. Burial will follow in Ridge Hill Memorial Park, Amherst Twp. Military honors will be conducted at the cemetery.
To send online condolences go to www.dovinfuneralhome.com.