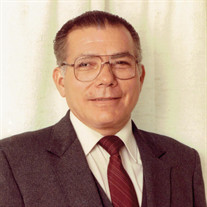 Tomas Badillo passed on to eternal life on Thursday, September 6, 2018. He was 88 years old.
Tomas was a steelworker, but his real work in life was his service to Sacred Heart Chapel and the Catholic Church.
He was ordained a Deacon in the Catholic Church in 1986, but his years of service to Sacred Heart Chapel went beyond serving as a Deacon. He helped found the Charismatic Prayer Group, served as president of the Sociedad Del Santo Nombre, and president of the Parish Council. He participated in the Cursillos de Cristiandad and also served as president of the Sacred Heart Credit Union.
His service also went beyond Sacred Heart Chapel. He led a Catholic Radio program called Amor y Unidad on a local radio station for 10 years. He served as Sacred Heart's representative to various regional and diocesan committees and conferences, which often meant traveling near and far to attend events. He enjoyed the travel and helped organize a church trip to the Holy Land, which he fondly recalled for many years.
Tomas retired as a Deacon in 2002. The 16 years he served as an active deacon followed 37 years as a steelworker. He retired from U.S. Steel in 1987, the year after he was ordained. In his retirement years, Tomas earned another title and a rare one: pancreatic cancer survivor. He was diagnosed in 2005. Surgery, chemotherapy, and the grace of God kept the disease at bay. His remaining years were spent growing vegetables in his garden, following the Cleveland Indians, and making a few trips to Puerto Rico to visit family.
Tomas is survived by Mercedes, his wife of nearly 64 years, and seven children; Elcida (Juan) Palacios of Lorain, Norma (Robert) Malone of Avon, Francisco (Matilde) of Glen Allen, VA, Javier (Natale) of Cleveland, Ana (Patrick) Rhyner of Quakertown, PA, Mercedes (Frank) Szuch of Elyria, and Yolanda (Marcos) Maldonado of Lorain. Tomas is also survived by 16 grandchildren, five great grandchildren, and two great-great grandchildren.
His surviving sibling is his brother David of Aguada, Puerto Rico. Tomas was born in Aguada, Puerto Rico on December 29, 1929 to Lucia and Raimundo Badillo, the sixth of nine children. Besides his parents, he was preceded in death by his sisters, Romana, Francisca, Mariana and Reyes; and his brothers, Manuel, Leonardo and Angel.
The family also wishes to extend its thanks to all the caregivers who helped Tomas as his health declined, including Don and Angela of Crossroads Hospice, Kathy of Griswold Home Care, and Taylor of Health Land Home Care.
The family will receive friends on Monday, September 10, 2018 at Sacred Heart Chapel, 4301 Pearl Avenue, Lorain, beginning with a Vespers Service at 3:00 pm presided by Rev. Donald P. Oleksiak, Vicar General of the Diocese of Cleveland. Visitation will follow until 7:30 pm. The family will also receive friends on Tuesday from 10:00 am until the time of Mass of Christian Burial at 11:00 am, presided by Bishop Nelson J. Perez. Burial will follow in Calvary Cemetery, Lorain.
The Dovin Funeral and Cremation Specialists, 2701 Elyria Avenue, Lorain, is handling the arrangements.
In lieu of flowers, family suggests those who wish may make donations in Tomas' name to Sacred Heart Chapel.

To order memorial trees or send flowers to the family in memory of Tomas Badillo, please visit our flower store.