Stanley "Stacey" Klimczak, 96, of Lorain, died Thursday, November 13, 2014 at Lake Pointe Health Care, Lorain, following a lengthy illness.
Born February 1, 1918 in Elyria, he graduated from Elyria High School in 1936. He attended Fenn College in Cleveland where he studied printing. In 1959 he moved to Lorain.
Stacey served in the 71st Infantry Division of the US Army during World War II. He received the American Defense Campaign Medal, American Campaign Medal, European African Middle Easter Campaign Medal with 2 Bronze Stars and the World War II Victory Medal. He also played clarinet in the Army band.
He worked as a pressman for Advance Printing in Lorain for 7 years, retiring in 1981. Prior to that, he worked as a pressman for Ohio Service Printing in Lorain for 20 years. After retirement, Stacey did printing from his home, specializing in ticket and prayer card printing.
Stacey was an active member of the former St. Stanislaus Catholic Church, Lorain, where he served as an usher and lector. He also was a member and officer of the churches Holy Name Society where he was awarded Holy Name Man of the Year in 1989.
In the 1960's, Stacey formed the Gold Tones Orchestra, playing his clarinet and saxophone for many events of the years.
Surviving are his sons, Ed of Amherst and James of Naples, Florida; grandchildren, Albert, Andrew, Lauren and Julie.
He was preceded in death by his wife of 54 years, Louise (nee Kin) in 2014; parents, Paul and Mary (nee Stipulkowska) Klimczak; brothers, Anthony, Edward, and Felix; and a sister, Virginia Krupar.
The family will receive friends on Monday from 9:30 am until the time of mass at 11:00 am at St. Joseph Catholic Church, 200 St. Joseph Drive, Amherst. Rev. Lawrence Martello, pastor will officiate. Burial will follow in Calvary Cemetery, Lorain. The Disabled American Veterans Louis Paul Proy Chapter 20 will conduct military honors. The Dovin Funeral Home, 2701 Elyria Avenue, Lorain is handling the arrangements.
Contributions can be made to St. Joseph Church Music Program, 200 St. Joseph Drive, Amherst, Ohio, 44001.
To send online condolences go to www.dovinfuneralhome.com.

To plant memorial trees or send flowers to the family in memory of Stanley Klimczak, please visit our flower store.

Sorry for the loss of your father.Our thoughts and prayers go out to you and your family Ed. May you find peace knowing that he and your mom are together once again. Sincerely, The Elwells Mike Donna and Michael and Melissa and Steve Henderson 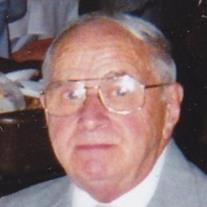