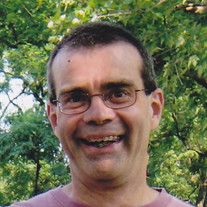 Roger A. Crayton, 57, passed away on April 6, 2014. He will be dearly missed by his wife of 30 years, Carole Ann (nee Chulig), loving daughter, Hilary, and beloved mother, Rosella (nee Bilow).
He leaves behind his sisters; Carol (Jack) Bizorik and Shirley (Jack) Clifford, brother, Ronald (Theresa), as well as many nieces, nephews, cousins, and many friends. Roger was preceded in death by his father, Robert, and brother-in-law, Jack Bizorik.
He attended Keystone High School, graduating in 1974 and Lorain County Community College in 1982, with an associates degree in Computer Sciences.
He worked at Invacare as Director of Global IT Governances.
The family would like to thank the ENT Staff of UH Seidman Centre and the doctors of Oncology and social workers for their wonderful, compassionate care for the past 2 weeks.
Roger was the happiest when he was outdoors. His pastimes included; taking long walks in Lorain County's Metro Parks with his adventurous dogs, Stitch and Belle, hiking the mountains of Maine, New Hampshire, Vermont, and Tennessee. Biking with his family was one of his favorite pleasures. Snorkeling and kayaking the Atlantic and Pacific Oceans with his daughter, Hilary, was a joy beyond comparison. He was a voracious reader of scientific journals, Mark Twain, nature and animal publications, and anything related to technology.
In lieu of flowers, the family is requesting that donations be made to the Friendship APL, 8303 Murray Ridge Road, Elyria, Ohio 44035 and to the Lake Erie Nature and Science Center, 28728 Wolf Road, Bay Village, OH 44140.
Private family services were held on Saturday, April 12, 2014. The Dovin Funeral Home, 2701 Elyria Avenue, Lorain, handled arrangements. To send an online condolence, go to www.dovinfuneralhome.com.
To order memorial trees or send flowers to the family in memory of Roger A. Crayton, please visit our flower store.