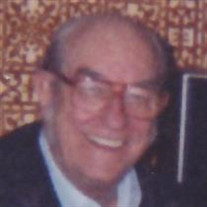 Richard F. Poplar, 85, of Lorain, passed away Sunday, January 24, 2016 at Anchor Lodge Retirement Village, Lorain, following a lengthy illness.
Born May 31, 1930 in Lorain, he lived in Lorain his entire life
Richard founded Poplar Heating Company, Lorain in 1957, owning and operating the company until his retirement in 1992.
He was a member of the former St. Stanislaus Catholic Church, Lorain, the Black River Stamp Club and the Lorain Numismatic Association. Richard enjoyed stamp collecting, coin collecting, playing softball and was an avid bowler. He maintained a bowling average of 190 for 20 years. Richard bowled in many classics and won many championships. In 1956, he bowled a 700 series.
Surviving is his step son, Ronald Skrepich of New York City; a brother, Joseph Poplar Sr. of Avon Lake; and a sister, Ann Marie Lehman of Casa Grande, Arizona.
He was preceded in death by his wife of 48 years, Irene (nee Michalski) in 2005; parents Ben and Anna (nee Kurowski); step son, Richard Skrepich; and a brother, Benjamin Poplar
The family will receive friends on Wednesday from 2:00 - 6:00 pm in the Dovin Funeral Home, 2701 Elyria Avenue, Lorain, where funeral services will be Thursday at 9:30 am followed by mass at 10:00 am at Nativity of the Blessed Virgin Mary Catholic Church, 418 W. 15th Street, Lorain. Rev. Robert J. Glepko, pastor will officiate. Burial will follow in Calvary Cemetery, Lorain. To send online condolences go to www.dovinfuneralhome.com.
To order memorial trees or send flowers to the family in memory of Richard F. Poplar, please visit our flower store.