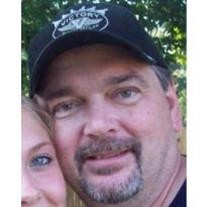 Richard Allen Ford, beloved husband, father, son, brother, and friend to many, passed away at the age of 49, on Wednesday, March 21, 2012, at University Hospital, Cleveland, following a brief illness.
He was born on November 20, 1962, in Lorain, where he lived most of his life. He was a 1981 graduate of Southview High School, Lorain and attended then Ohio State University.
Rick loved the outdoors, gardening, and sports, especially the Cleveland teams, and he was an avid Ohio State University Buckeye Fan. He also enjoyed riding his "Victory" motorcycle, movies and music.
He is survived by his wife, Julie L. (nee Boone), sons; Alex, of Chicago and Zachary, of Lorain, daughter, Hannah, of Lorain, parents; Don & Gloria (nee VanNest) Ford, of Lorain, and his sister, Debbie (Tom) Cotterill, of Lorain. He is also survived by many aunts, uncles, nieces, nephews, cousins, and many friends.
He was preceded in death by his grandparents; Elmer & Ruth Ford and Harry & Leotta VanNest, uncles; Larry Ford, and Bob and Tom VanNest, and his aunts; Louise Morris and Shirley Carpenter.
The family will receive friends on Sunday, March 25, 2012 from 4-8 p.m., in the Dovin Funeral Home, 2701 Elyria Avenue, Lorain, where services will be held on Monday at 9:30 a.m. His funeral Mass will follow, at 10:00 a.m., at Nativity of the BVM Catholic Church, 418 West 15th Street, Lorain. Rev. Fr. Robert J. Glepko, Pastor, will officiate. Burial will follow in Elmwood Cemetery, Lorain.

To order memorial trees or send flowers to the family in memory of Richard Allen Ford, please visit our flower store.