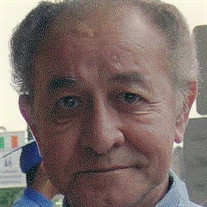 Ralph Gonzalez, 76, of Lorain, passed away Wednesday, May 20, 2015 surrounded by his family and friends at Mercy Regional Medical Center, Lorain.
Born April 6, 1939 in Lorain, he lived in Lorain his entire life. Ralph served in the US Air Force.
He retired from USS Kolbe Steel in Lorain, where he worked 38 years. He was a member of the United Steel Workers Union Local 1104.
Ralph was an active supporter of the World Wildlife Fund. He enjoyed telling stories, camping and was an avid "Mighty" Cleveland Browns fan.
Surviving are his sons, Ralph Jr. of Lorain, John (Janet) of Elyria and Marc (Sue) of Berea; a daughter, Raelene (Claude) Kubrak of Avon Lake; 8 grandchildren and 2 great grandchildren; brothers, Pedro (Chach) Gonzalez of Lorain, Paul Gonzales of Lorain, Joseph (Gail) Gonzales of Lorain and Felipe (Betty) Gonzales of S. Carolina; sisters, Mina (Raymond) Fortier of California, Trini Sanders of Cleveland and Margaret Blauvelt of Florida.
He was preceded in death by his parents, Apolinar Gonzalez in 1965 and Soledad (nee Diaz) Gonzalez in 1960; and his beloved Golden Retrievers, Sarge and BJ.
The family will receive friends on Friday from 2-4 and 6-8 pm in the Dovin Funeral Home, 2701 Elyria Ave., Lorain, where funeral services will be Saturday at 1:30 pm in the funeral home. Rev. John Retar, pastor of St. Frances Cabrini Parish, Lorain, will officiate. Burial will follow in Ridge Hill Memorial Park.
To send online condolences go to www.dovinfuneralhome.com
To order memorial trees or send flowers to the family in memory of Ralph Gonzalez, please visit our flower store.