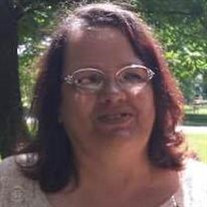 Patti Kelli (nee Hall), age 58, of Lorain, passed away Sunday, October 14, 2018 at Cleveland Clinic in Cleveland following a lengthy illness.
Born October 6, 1960 in Elyria, she moved to Lorain in 2004. For the past 4 years she has made Elyria her home. She was a 1979 graduate of Elyria High School and received an Associated Degree in Accounting from Lorain County Community College.
Patti was a school bus driver in Elyria for many years. Prior to that, she worked in the bakery department of Tops Friendly Market. Patti was a member of Midway Baptist Church in Elyria and enjoyed watching television, traveling and camping.
Surviving are her daughters, Tiffani Reedy and Amanda Lowery both of Elyria; grandchildren, Dylan, Ivy, Sharron and Lilly; brothers, Larry Hall of Cincinnati and Jeffry Hall of North Carolina; and sisters, Sharron Pottorf of Cincinnati and Dee Ann Hall of Elyria. She is also survived by her former husband and life partner, David Schnitzler of Elyria.
She was preceded in death by her parents, Oran Hall in 2002 and Harriett (nee Bailey) Hall in 2009.
According to Patti's wishes, there will be no visitation or funeral services.
To order memorial trees or send flowers to the family in memory of Patti Kelli, please visit our flower store.