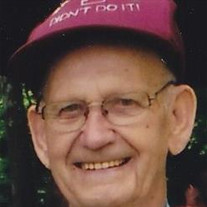 Oliver Arle Heck, 83, of Lorain and Fairmont, West Virginia, passed away Thursday, October 30, 2014 at Mercy Regional Medical Center, Lorain, following a sudden illness.
Born January 27, 1931 in Fairmont, West Virginia, he moved to Lorain in 1955. Since then he has traveled back and forth to Fairmont many times through the years.
Oliver served in the US Army during the Korean War. He received the National Defense Service Medal and Army Occupation Medal.
He retired in 1985 from Lorain Works US Steel, where he worked as a crane operator for 30 years. Following his retirement from US Steel, Oliver worked at McDonalds on Griswold Road in Elyria for 12 years, retiring from there in 2001.
Oliver enjoyed traveling.
Surviving are his daughters, Linda Heck, Carla Milam, Etta Heck and Beth Jarvis all of Lorain; grandchildren, Jennifer, Tracy, Erika, Tabitha, Thomas and Landis; sisters, Emma of Florida and Nellie of West Virginia.
He was preceded in death by his wife of 46 years, Elizabeth JoAnn (nee Moran) Heck in 2001.
The family will receive friends on Sunday from 2:00 - 6:00 pm in the Dovin Funeral Home, 2701 Elyria Avenue, Lorain. Funeral services will be Monday at 11:00 pm in the funeral home.
Burial will follow in Resthaven Memory Gardens, Avon.
To order memorial trees or send flowers to the family in memory of Oliver A. Heck, please visit our flower store.