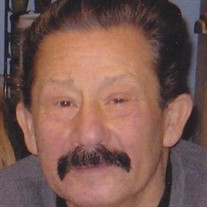 Moises Gonzalez, 68, of Louisville, Kentucky, passed away Saturday, December 5, 2015 at Mercy Regional Medical Center, Lorain, following a lengthy illness.
Born December 27, 1946 in Utuado, Puerto Rico, he came to Lorain in 1969 then moved to Louisville, Kentucky in 1999.
Moises worked as an assembler for Ford Motor Company for 32 years, retiring in 2006.
While living in Lorain, he was an active member of Principe de Paz Lutheran Church. He was also a member of the United Auto Workers Union Local 425. He enjoyed working on cars and watching wrestling on television.
Surviving is his wife, Luz Angelica (nee Guzman) Gonzalez; sons, Moises Gonzalez Jr. of Columbus, James L. Fox of Lorain, Juan Barrios and Roger Barrios both of Louisville, Kentucky; daughters, Erica Gonzalez-Adams of Lorain and Dangella Spalding of Miami, Florida; 6 grandchildren and several brothers and sisters.
He was preceded in death by his parents, Hermenegildo and Adela (nee Martell) Gonzalez.
The family will receive friends on Tuesday from 2:00 - 6:00 pm in the Dovin Funeral Home, 2701 Elyria Avenue, Lorain. Entombment will be in Louisville, Kentucky. To send online condolences go to www.dovinfuneralhome.com
To order memorial trees or send flowers to the family in memory of Moises Gonzalez, please visit our flower store.

The Chapel of Bright Funeral Home