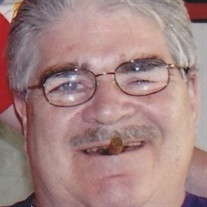 Michael A. Serfozo, 71, of Amherst Township, passed away Wednesday, September 24, 2014 at New Life Hospice Residential Center, Lorain, following a short battle with cancer.
Born December 10, 1942 in Lorain, he moved to Amherst Twp. 45 years ago. Michael graduated from Clearview High School in 1960, and with his football team, was later inducted into the Lorain Sports Hall of Fame.
He was employed as a sheet metal worker at Delphi in Sandusky for 28 years, retiring in 2007. Prior to this, he worked at American Shipbuilding Company, Lorain.
He was a member of the United Auto Workers Union Local 913 and the Fraternal Order of Eagles 1442 of Amherst.
Michael enjoyed fishing, hunting and watching football. He was an avid Cleveland Browns and Ohio State Football fan.
Surviving is his wife of 49 years, Janice (nee Boreski); sons, Nicolas and Michael (Janice) both of Amherst; grandchildren Scott Serfozo and Jackie Serfozo; brothers, Joseph D. of Lorain, and Dana C. of Vermilion.
He was preceded in death by his parents, Joseph Serfozo in 1985 and Julia (nee Moskal) Serfozo in 1984; his daughter, Laurie Martin in 2005; and a brother, Phineas in 2007.
The family will receive friends on Friday from 5:00 - 8:00 pm in the Dovin Funeral Home, 2701 Elyria Avenue, Lorain. Funeral services will be Saturday at 1:00 pm in the funeral home. Burial will follow in St. Mary Cemetery, Elyria.
In lieu of flowers, contributions can be made to New Life Hospice, 3500 Kolbe Road, Lorain, Ohio 44053 or to the American Cancer Society, 11432 Mayfield Road, Cleveland, Ohio 44106-2364.
To send online condolence go to www.dovinfuneralhome.com

Portage, PA,
To order memorial trees or send flowers to the family in memory of Michael A. Serfozo, please visit our flower store.