Michael Albert Kocak, age 95, a retired captain of the Lorain Police Department Detective Bureau, passed away Saturday, July 8, 2017 at Asbury Heights senior facility in Pittsburgh, PA, where he had been a resident for the past 5 1/2 years.
Born April 25, 1922 in Lorain, he graduated from Lorain High School in 1940. After graduation, he attended electronics school in Kansas City and then worked for Capital Airlines in Cleveland, Harrisburg and Washington, D.C.. He advanced in rank to flight officer by the time the company was taken over by Air Transport Command. During this time, he had logged hundreds of hours of flying time. In 1944 he was drafted into the Army Air Corp and went straight into combat service as a navigator on B-25's, flying 100 combat hours in Europe. By the time he was honorably discharged in 1946, he had totaled 2,500 hours in the air and had visited every country in Europe.
After the service, Michael worked a short stint as an accountant at National Tube in Lorain. Realizing that accounting wasn't for him, Michael took the police exam and joined the Lorain Police Department in 1948. He career started as a patrolman and in 1957 he joined the detective bureau. Michael advanced to Sargent in 1962 then to Lieutenant in 1966. In 1977, he became Captain of the Detective Bureau. After 35 years with the police department, Michael retired in 1983.
Michael was a member of the former St. Ladislaus Catholic Church in Lorain where he was active in the Holy Name Society, serving a term as President. When St. Lad's closed, he joined St. Peter Parish in Lorain. He was the past president of the Federation of Police Lodge 3 and past president of The Police and Fireman's Holy Name Society.
Michael had an FCC First Class Radio Telephone Operators License which qualified him to run all types of wireless communication equipment including radio stations and ocean-going ships.
He loved sports, especially baseball. Michael and his son went to many Indians games along with Brown's training camps in Hiram. He was an avid golfer, golfing well into his 80's and still swinging a club at 94 years old.
Surviving is his son, Michael S. (Mary Ann) Kocak of Pittsburgh, PA; grandson, Kevin S. Kocak of Pittsburgh, PA; several nieces and nephews.
He was preceded in death by his wife of 43 years, Vilma (nee Szabo) Kocak in 1994; his parents, Michael F. and Veronica (nee Mudrick) Kocak; and sisters, Margaret Super, Helen Super and Mary Krucinski; a nephew, Randall Super; and a niece, Vernette Super.
The family will receive friends on Wednesday from 4:00 to 8:00 pm in the Dovin Funeral and Cremation Specialists, 2701 Elyria Avenue, Lorain. Funeral services will be Thursday at 10:30 am in the funeral home followed by mass at 11:00 am at St. Peter Parish, 3655 Oberlin Avenue, Lorain. Rev. Craig M. Hovanec, pastor will officiate. Burial will follow in Calvary Cemetery, Lorain. The Disabled American Veterans Louis Paul Proy Chapter 20 will conduct military honors. Contributions in his memory may be made to Asbury Heights senior facility, 700 Bowerhill Road, Pittsburgh, PA 15220 To send online condolences go to www.dovinfcs.com.

To plant memorial trees or send flowers to the family in memory of Michael Kocak, please visit our flower store.

A candle was lit in memory of Michael Kocak

CUE of West Virginia purchased the Sacred Duty Spray for the family of Michael A. Kocak.

A candle was lit in memory of Michael Kocak 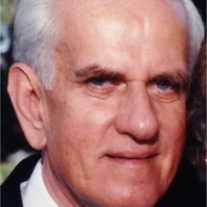