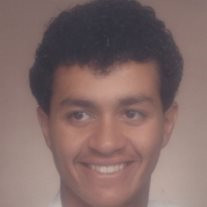 Michael A. Gonzalez, 45, of Lorain, passed away Monday, March 10, 2014 following an illness with Multiple Sclerosis.
Born January 22, 1969 in Lorain, he graduated from Southview High School in 1987. He graduated with a bachelor's degree from Ohio State University in art education. While attending high school and college he went to state in tennis.
He started his teaching career in Lorain at Larkmoor Elementary School. He then worked in the Cleveland School District for many years until his illness set in. During this time, he taught English, Spanish, Art, and soccer. He also tutored many curriculums.
He belonged to the teachers union where he had held office.
He enjoyed playing soccer, having played on a traveling team from Macedonia. He also enjoyed golfing with his buddies and playing tennis. He backpacked several times across Europe. He loved his dog, Phagez.
Surviving is his mother, Nervia Iris Morales Gonzalez of Lorain; his father, Jose C. Gonzalez of Lorain; a brother, Victor M. Gonzalez of Lorain; a sister, Raquel Iris Gonzalez of Lorain; his paternal grandmother, Josefa Gonzalez of Miami, FL; nieces and nephews, Alisia, Shawn, Desiree, Xavier, JaVain, and Kairi; and several aunts and uncles.
The family will receive friends on Saturday from 1:00 pm until the time of memorial services at 2:00 pm in the Dovin Funeral Home, 2701 Elyria Ave., Lorain. Anthony Witherspoon, Elder of Jehovah's Witnesses will officiate.
To order memorial trees or send flowers to the family in memory of Michael A. Gonzalez, please visit our flower store.