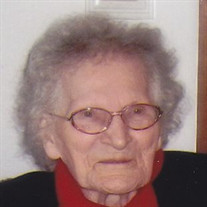 "Mayme" Mary Elizabeth Ashyk, (nee Koma), daughter of the late Maria E. Palko and Andrew John Koma and granddaughter of the late Maria E. Gazdik and Joseph John Palko, passed away Tuesday, July 29, 2014 at Autumn Aegis Nursing Home following a lengthy illness.
She was the third generation to be born in Lorain. She was a member of the former Holy Trinity Catholic Church, Lorain, and a member of St. Anthony of Padua Catholic Church, Lorain, where she was a member of the Altar and Rosary Society. She was also a life long member of the Slovak Catholic Sokal Lodge. In her younger days, she was an active competitor with the national Slovak Sokal Drill Team. She attended Holy Trinity Catholic School and Hawthorne School in Lorain. She also attended Lorain High School. She won the Carnegie Administration Scholarship in Art. Due to the Depression in 1929 and the Lorain Tornado in 1924, her greatest lifetime dream of becoming a business attorney was hindered. Being business minded, Mayme worked at the A & P store after high school. Then downtown Lorain at Smith & Gerhart store. In 1938, she married her school days sweetheart, Stanley Ashyk. Mayme also worked at Mason Toy Factory, National Tube, Cleveland Carts Brothers, King Shoe Store and Akron Venetian Blind Factory. Mayme owned and operated Ashyk's Drapery and Venetian Blind Shop in Lorain for 31 years, retiring in 1977.
Surviving is her cousin, Richard and Donna Smith of Amherst along with many other cousins.
She was preceded in death by her husband of 60 years, Stanley in 1998; and a sister.
Friends will be received on Friday from 4:00 - 8:00 pm in the Dovin Funeral Home, 2701 Elyria Avenue, Lorain, where funeral services will be Saturday at 9:30 am followed by mass at 10:00 am at St. Anthony of Padua Catholic Church, 1305 E. Erie Avenue, Lorain. Rev. Richard E. Hudak, pastor will officiate. Burial will follow in Calvary Cemetery, Lorain.
To order memorial trees or send flowers to the family in memory of Mayme E. Ashyk, please visit our flower store.