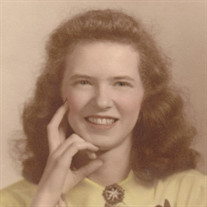 Mary Ruth "Ruthie" Parks died on Wednesday, April 8, 2015 at the age of 92 at her home in Lorain, OH surrounded by her family. Mary Ruth was born on April 3, 1923 in Elyria, OH, the only child of
Thomas and Gertrude (nee Nelson) Kershaw. She attended McKinley Elementary School and
Elyria High School where she met many life-long friends. She took a job working at Elyria Memorial
Hospital in the medical records department, but quit that job when she married John A. Parks in 1948.
They had 4 children; Barb, Ken, Gary and Tom. She had been an only child and always knew she
wanted more than one of her own. She did not return to the work force until her children were in school. At that time she began working as a personal secretary and office manager for thoracic surgeon Dr. Peter Ferrato, and stayed with him for 27 years as he expanded his practice to include
Drs. Sabga and Young. The patients regularly greeted her with "Hello Sunshine". She retired at age 63 and began a second "career" as grandmother, driver for Meals on Wheels, and world traveler. Her interest began in 1947. Mary Ruth and her friend Betty left their home town of Elyria for a tour of the American West by bus. When they got to Colorado Springs, CO they stayed at a hotel called The Cliff House that they loved so much they asked if they could have jobs there and were told yes. They returned to Elyria , quit their jobs (much to Mrs. Kershaw's dismay and Mr. Kershaw's joy), and returned to the hotel to wait tables and sleep in a bunkhouse. Ruthie talked about it for the rest of her life. She sais she had 3 proposals that summer, but we think she was being modest. After she retired she took two cruises with her best friend Sue Simon to Alaska and the Panama Canal, and she and Sue also took a memorable trip to the British Isles. She made two trips to Hawaii; one with her husband and one with Dick Goddard (and John!). She and her daughter made a grand tour of Europe in 1989 and, until dementia and Alzheimer's disease robbed her of her memories, enjoyed recounting stories of their adventures in England, Germany, Switzerland, Italy and France to family and friends.

Parks-Wise, and three great grandchildren - Eliot Parks - Wise, Cadence Titus and Emma Kent. She was preceded in death by her son Kenneth Parks of Ann Arbor MI in 2010 and her 1966 red Mustang (the automobile love of her life).

Mary Ruth began developing symptoms of dementia about 10 years ago but was able to continue to live at home due to the devoted care of her sons Richard and Tom. The family would also like to thank her devoted caregivers Kelly, Mercedes and Emmy, as well as the doctors and nurses of the Cleveland Clinic and the wonderful staff of Hospice.

She was kind, considerate, thoughtful, funny, generous and, as you can tell by her photo, quite a looker. While raising her children, not a week went by that she did not bake a batch of chocolate chip or snickerdoodle cookies. She was a reluctant canoeist and an avid gardener. A memorial gathering will be held on Saturday April 18 at the Rose Café in Lakeview Park, Lorain, OH at 4:00 p.m.

.
To order memorial trees or send flowers to the family in memory of Mary Ruth Parks, please visit our flower store.