Mary Ellen "Mel" Burness, age 74, of Lorain, passed away on Tuesday, April 15, 2014, at Wesleyan Village, Elyria, while under the care of Crossroads Hospice.
She was born on January 16, 1940 in Spencer, Mass., and had lived in Ohio for the past 60 years. She worked at Murray Ridge from 1975 until retirement in 1992. Mary was a member of the Salvation Army in Elyria for over 60 years. She enjoyed cross stitching and traveling.
Mary is survived by her brothers; David, of Milford, Mass, Walter (Gloria), of Bartlett, Tenn., and John "Jack" (Pat), Duesenberry, of Lorain, her sister, Ruth Frye, of Elyria, and 17 grand nieces and nephews and 14 great grand nieces and nephews. She is also survived by her life-long friend, James "Jim" Blatchley, of Newport Richey, Fla.
She was preceded in death by her brothers; Lloyd and Richard, and her parents; Walter and Olga (nee Tucker) Burness.
The family will receive friends for a memorial service on Monday, April 21, 2014 at 1:00 p.m. at the Salvation Army, 716 Broad Street, Elyria, Ohio 44035. Major Robert and Alice Sears, will officiate. A private family burial will be held in Mass. at a later date.
In lieu of flowers contributions may be made to the Salvation Army, Elyria. The Dovin Funeral Home, 2701 Elyria Avenue, Lorain is handling the arrangements.

To plant memorial trees or send flowers to the family in memory of Mary Burness, please visit our flower store.

Mary was very loved , I am sorry for your loss. But please take comfort in knowing that the bible holds out the hope that we can soon see our dead loved ones again. Being able to hear their laughter again and enjoy all the fun things with them again. I will keep your family in my prayers. Rev.21:4 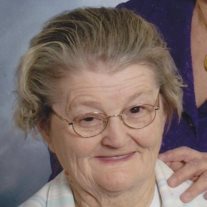