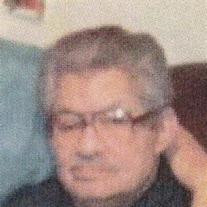 Luis A. Velez, age 77, of Lorain, passed away on Saturday, July 28, 2012 at the Specialty Hospital of Lorain, Amherst, following a brief illness.
He was born on February 10, 1935 in Utuado, Puerto Rico, moving to Lorain in 1953. Luis was a former member of St. Joseph Catholic Church, after it closed he joined Sacred Heart Chapel, Lorain. Luis was employed as a barber at LaFortuna, on Pearl Avenue, for 30 years. He was the first Puerto Rican barber in the Lorain community. He was a founder of the Puerto Rican Home, where he served as it's president for 3 terms. He was an activist in the Puerto Rican community in it's infancy in the city of Lorain.
He is survived by his wife, Andreita (nee Afanador), sons; Carlos (Mirinet), of Lorain and Luis Jr. (Cherie), of FL, daughters; Andreita R. (Gregg) Arsenault, of Lorain, Diane Velez, of Elyria, Sonia (Pete Rivera) Velez, of Litchfield, and Marisol (Kyle) Velez-Fairchild, of Lorain, 7 grandchildren; Robert and Michael Sanchez, Andrea, Carlos, and Alexis Velez, Emily and Emilio Fairchild, step-granddaughter, Destini Arsenault, brothers; Jose Luis Velez, of Lorain, Jose Antonio Gonzalez, of Oberlin, Nicholas Antonio Gonzalez, of NJ, Angel Gonzalez, of Sheffield Lake, and Michael Gonzalez, of KY, and his sisters; Gloria Badillo, Rosa Torres, Ana Gonzalez, all of Puerto Rico, Lidia Gonzalez, of Westlake and Carmen Gonzalez, of Lorain.
He was preceded in death by his parents; Confesor and Amparo (nee Andujar) Velez.
The family will receive friends on Tuesday, July 31, 2012 from 2-4 and 7-9 p.m. in the Dovin Funeral Home, 2701 Elyria Avenue, Lorain, where services will be held on Wed. at 8:45 a.m., followed by a Mass, at 9:30 a.m., at Sacred Heart Chapel, 4301 Pearl Avenue, Lorain. Rev. Fr. William Thaden, Pastor, will officiate. Burial will follow in Calvary Cemetery.

To order memorial trees or send flowers to the family in memory of Luis A. Velez, please visit our flower store.