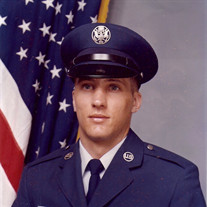 Leonard Kopa, age 53, of Del City, Oklahoma, formerly of Lorain, entered into heavens gates on Monday, May 26, 2014.
He was born on January 21, 1961 in Bay Village, Ohio to Anthony and Viola (nee Greene) Kopa. He was a former member of St. Mary's Catholic Church, Lorain, where he attended elementary school. He was a 1979 graduate of Lorain High School. Leonard entered the United States Air Force in 1981. While in the service he graduated from the NCO prep course in 1985, the NCO academy in 1990 and the Senior NCO academy in 2003. He made a lifetime career in the service for 26 years, reaching the rank of Senior Master Sergeant (SMSgt) until his retirement and disability in 2007. While in the service he was stationed at Holloman AFB in New Mexico, Nellis AFB in Las Vegas, Kunsan AFB in Korea, McDill AFB in Tampa, Tyndall AFB in Panama City, Davis Monthan AFB in AZ, and Tinker AFB in Oklahoma. He worked on the F-117 Stealth Fighter jet program as well as the F-16 and T-38 fighter jet programs. One of his greatest moments was when he won a flight in the F-16 fighter jet at Nellis.
He received numerous awards in the service with one reading the following: SMSgt Leonard Kopa distinguished himself in the performance of outstanding service to the United States. His efforts directly aided the 355th Wing in sustaining the commands highest flight hour program. The singularly distinctive accomplishment of SMSgt Kopa reflect great credit upon himself and the United States Air Force. His medals included Meritorious Service Medal, Air Force Commendation Medal, AF Achievement Medal, AF Outstanding Unit Award, AF Good Conduct Award, National Defense Service Medal, Global War on Terrorism Service Medal and Korean Medal.
One of Leonard's greatest passion was the love for his children, he was a talented artist, an avid Cleveland Browns Fan, he had a thirst for knowledge and as described by his daughter, was a student till the end. He loved to study astronomy and document his findings and he loved music.
He will be dearly missed by his son, Christopher, of Houston, TX, daughter, Dawn of Houston, TX, and son, Ryan, who Len was raising as a single father. His 1st wife and lifetime friend, Donna (nee Thomas) Kopa. His brothers, Larry (Theresa) Kopa, of Dayton, OH, Ron, of Elk Grove, CA, Fred (Teresa) Kopa, of Lorain, sisters, Ellie (Jack) Betka, of Lorain and Peggie (Dr. James) Cohen, of Westlake, 8 nephews, 5 nieces and 4 great nieces and 1 great nephew, several aunts, uncles and numerous cousins.
He was preceded in death by his parents, Anthony and Viola (nee Greene) Kopa, grandparents, Stanley and Nora (nee Bomba) Kopa and Jacob and Ellen (nee Misavage) Greene.

Family will receive friends on Saturday, June 28th, 2014 from 9:00 a.m. until time of memorial service at 11:00 a.m. in the Dovin Funeral Home, 2701 Elyria Avenue, Lorain. Entombment will follow at Calvary Cemetery. Full military honors will be conducted at the cemetery. To send online condolences go to www.dovinfuneralhome.com.
In lieu of flowers, contributions in Lenny's memory, may be made to: Wounded Warrior Project, PO Box 758517, Topeka, KS 66675, or log on to www.woundedwarriorproject.org.

To order memorial trees or send flowers to the family in memory of Leonard Kopa, please visit our flower store.