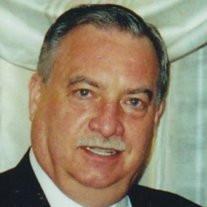 Launey J. Dovin, 71 of Amherst, passed away Saturday, October 12, 2013 at New Life Hospice Residential Center, Lorain, following a lengthy illness.
Born January 2, 1942 in Lorain, he moved to Amherst in 2003. Launey graduated from Borromeo High School, Wickliffe in 1959 then from Pittsburgh Institute of Mortuary Science in 1962. In 1966 he received a Bachelor's of Arts degree from John Carroll University.
Launey was a member of the former St. Stanislaus Catholic where he was active in the Holy Name Society and organized and directed the Holy Name Men's Choir. He served on the board of the Holy Name Society of the Lorain County District. In 1965, he changed rite and became a member of St. Nicholas Byzantine Catholic Church, continuing his involvement with the Holy Name Society there. He was a founding member of the Callistian Guild, an organization dedicated to the fundamental principle that the poorest of God's children are entitled to be buried with dignity. In 1976, Launey became the first Certified Eye Enucleator Technician in Lorain, Huron and Erie Counties, having performed hundreds of procedures and developed the program for courier volunteers. He was on the board of directors of El Centro de Servicios Sociales in Lorain from 1997 to 2004, holding offices of president and vice president.
Owner and operator of the Dovin Funeral Home, Lorain, Launey was a licensed funeral director and embalmer for 50 years. He was a member of the Greater Lorain Funeral Directors Association, and served as secretary for 27 years. He was a member of the Ohio Embalmers Association holding all offices culminating in a two-term presidency in 1986 and 1987. As a member of the Embalmers Association of Cleveland and the Cuyahoga County Funeral Directors Association, Launey introduced many innovations and progressive practices to funeral service through the presentation and dissemination of papers during local and statewide conventions. He was a member of the Ohio Funeral Directors Association having served as president of Ohio District 17, and the National Funeral Directors Association. He was a member of many fraternal, nationality and social organizations.
He enjoyed traveling, collecting stamps, icons and manuscripts and reading newspapers. He also loved learning and speaking different languages. Launey took great pleasure in shopping at ethnic grocery stores and had an expansive and distinguished palette for international foods.
He is survived by his loving wife of 48 years, Susan (nee Vanischak); his son, John E. of Lorain; his daughter, Marie (Bill) Stumphauzer of Brighton, MI; his grandchildren, Olivia and Erica Dovin, and Evelyn and Nicholas Stumphauzer; and his brother, Wayne Dovin of Fort. Myers, FL.
He was preceded in death by his father, John R. Dovin in 1993, and mother, Wanda A. (nee Kowalski) Dovin in 2004.
The family will receive friends on Wednesday from 1-4 and 6-9 pm in the Dovin Funeral Home, 2701 Elyria Avenue, Lorain, where parastas services will be held at 1:30 pm conducted by Very Reverend Nicholas Rachford, J.C.L. and Very Rev. Canon Steven M. Paliwoda and at 7:00 pm. conducted by Very Reverend Basil Stoyka.
A Panachida service will be Thursday at 10:30 am in the funeral home followed by Divine Liturgy at 11:00 am at St. Nicholas Byzantine Catholic Church, 2711 W. 40th St., Lorain. Very Reverend Nicholas Rachford, J.C.L. pastor will officiate and Very Rev. Canon Steven M. Paliwoda, pastor of St. John Ukrainian Byzantine Catholic Church will concelebrate. Burial will follow in Calvary Cemetery, Lorain.
Contributions can be made to the Memorial/Activity Fund of St. Nicholas Byzantine Catholic Church, 2711 W. 44th Street, Lorain, OH, 44055 or to Sisters of St. Basil the Great, P.O. Box 878, Mt. St. Macrina, Uniontown, Pa. 15401.

To order memorial trees or send flowers to the family in memory of Launey J. Dovin, please visit our flower store.