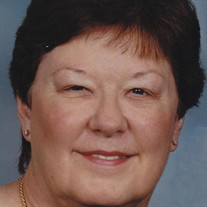 Karen A. Nunez (nee Hetsler), 76, of Lorain, passed away Thursday, December 25, 2014 at New Life Hospice Residential Center, Lorain, following a lengthy illness.
Born December 22, 1938 in Ashland, Ohio, she lived in Monroe Falls, Ohio before coming to Lorain in 1970. She also lived in Arlington, Virginia, and Dayton, Ohio, for a short time.
Karen graduated from Ashland High School in 1956 and received a Bachelor's Degree from Ohio University. She also took Master's classes at Bowling Green State University.
Karen worked as a teacher in the Lorain School System for 25 years, retiring in 1995.
She was a member of St. Anthony of Padua Catholic Church, Lorain, where she had played the organ. She was a member of the Order of the Eastern Star, Sigma Kappa, Lakeland Women's Club and American Association of University Women where she had served as president. She was also a life member of Ohio Education Association and served on the Board of Directors for the Lorain Palace Theater during the theaters last renovation.
She enjoyed playing bridge, reading, golfing, traveling, crafts and sewing.
Surviving is her husband of 53 years, the Honorable Gustalo "Gus" Nunez; a son, Dr. Timothy Nunez of Nashville, TN; and a daughter, Nancy Moore of Lorain; grandchildren, Kathryn, Jacob and Lexie; and a sister, Sherry Burns of Ashland.
She was preceded in death by her parents, Loftin and Iva (nee Landis) Hetsler.
A memorial mass will be held Saturday, January 10, 2015 at St. Anthony of Padua Catholic Church, 1305 East Erie Avenue, Lorain, at 10:00 am with a reception at the church hall to follow. Rev. Richard E. Hudak, pastor will officiate.
In lieu of flowers, contributions can be made to the Alzheimer's Association, P.O. Box 74924, Cleveland, Ohio 44194-4924.
The Dovin Funeral Home, 2701 Elyria Avenue, Lorain, his handling the arrangements.
To send online condolences go to www.dovinfuneralhome.com.
To order memorial trees or send flowers to the family in memory of Karen A. Nunez, please visit our flower store.