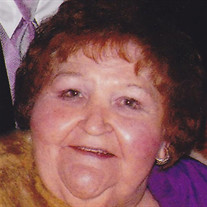 Mrs. June Garcia (nee King), age 80 of Lorain, passed away Tuesday, August 23, 2016 at University Hospital Elyria Medical Center following a lengthy illness.
Born June 6, 1936 in Gassaway, West Virginia, she moved to Lorain in 1956 where she has lived since.
June was a homemaker and loved gardening, cooking and taking care of her family.
June is survived by her sons, Richard of Elyria, Alex of Lorain, Gregory of Elyria and Larry of LaGrange; daughter, Brenda Colosi of North Royalton; 8 grandchildren including Nicara, Lacey, Sylvia, Austin and Ben; and several great grandchildren including Benjamin Jr.
She was preceded in death by her husband, Leopoldo Garcia in 1977; a son, Harley Conley; parents, Milton and Lucinda (nee Sears) King; and several brothers and sisters.
The family will receive friends on Friday from 10:00 am until the time of funeral services at 12:00 pm in the Dovin Funeral Home, 2701 Elyria Avenue, Lorain. Rev. Royal Martin, associate pastor of Tower Baptist Church, Lorain, will officiate. Burial will follow in Ridge Hill Memorial Park, Amherst Twp. To send online condolences go to www.dovinfuneralhome.com.
To order memorial trees or send flowers to the family in memory of June Garcia, please visit our flower store.