Joseph Andulics, 89, Sheffield Lake, passed away on February 21, 2017 at his home while under the care of Mercy New Life Hospice, Lorain, after a lengthy illness.
Beyond the pearly gates, we hope Joe will be greeted with sunny skies and fertile ground. Freed from the pain and physical limitations he suffered the last six years of his life, we are confident Joe's first task in heaven will be to prepare a nice patch for a carefully tended vegetable garden.
Joe was born on January 6, 1928 in Revere, Pennsylvania to George and Mary Andulics. On December 7, 1945, the 4th anniversary of the bombing of Pearl Harbor, he enlisted in the US Navy. Joe received his basic training at the US Navy Training Center Great Lakes and was stationed in Memphis. He was ranked Searman Second Class when he was discharged on October 3, 1947. Joe was very proud of service for which he received the World War II Victory Medal.
After his time in the Navy, Joe returned to Allison and for a brief time followed his father's footsteps into the coal mines. He quickly realized mining was not the career for him and he relocated to Lorain Ohio in 1949. He worked several jobs including a turret lathe operator at the Cleveland Tank Plant, a welder for Freuhauf, and an employee of the City of Lorain Water Works. Eventually he made his way to BF Goodrich where he worked first as a welder and then as a Maintenance Supervisor before retiring in 1989.
Joe and Adele Baron were married in Lorain on October 20, 1951. They resided in Lorain until moving to Sheffield Lake in 1977.
For Joe, retirement did not mean taking it easy. He was an accomplished woodworker and winter months found him in his workshop where he lovingly constructed everything from hope chests for his daughters to doll furniture for his granddaughters. His day was not complete unless it included a trip to the lumber yard or hardware store.
In the spring, Joe's attentions turned to the large vegetable garden he planted every year. He started planning early and his garden always included many variations of tomatoes. But the pride of his garden as always plants descended from tomato seeds his father brought to the United States, from Austria-Hungary, in 1917. Every year, his wife Adele carefully sprouted and nurtured seeds, saved from the previous year's plants, so Joe could carry on his father's tradition.
Warm weather also meant many hours spent on Lake Erie with his friend Steve Zientarski as they fished for perch while reminiscing about their youth in Pennsylvania.

Joe was known for his generosity and his willingness to play the part of "Mr. Fix-It" for family and friends. Just say the word and Joe would grab his toolbox and lend a hand. There was no repair he wouldn't attempt especially if it meant the opportunity to buy a new tool.
Another one of Joe's favorite activities was attending his grandchildren's sporting events. From volleyball to softball, football to soccer, Joe could be found on the sidelines cheering on his grandchildren. And the match was made even better if it included a concession stand stocked with hot dogs and chopped onions.
Joe will be dearly missed by Adele (nee Baron), his beloved wife of 65 years. Adele selflessly devoted the past six years tending to Joe's comfort and care. Joe also leaves his son Joseph (Lolanda) Andulics of North Ridgeville; his daughter Karen (Glenn) Bobel of Brownsburg IN, his daughter Tanya (Rick) Bradley of Lorain; his grandchildren, Angela, Christina, Joseph, Kathryn and Emily; his great-grandchildren, Taylor, Camryn, Fynlee, TJ and Anthony. He is also survived by his sister, Katherine of North Olmsted and his brother, Michael of Northfield. He was preceded in death by his parents, George and Mary; his sisters, Veronica, Mary, and Margaret; and his brothers, George and John.
The family will receive friends on Friday from 3:00 - 7:00 pm in the Dovin Funeral and Cremation Specialists, 2701 Elyria Avenue, Lorain. Funeral mass will be Saturday at 10:00 am at St. Thomas the Apostle Catholic Church, 715 Harris Road, Sheffield Lake. Rev. Stephen L. Shields, pastor will officiate. Following mass, The Disabled American Veterans Louis Pal Proy Chapter 20 will conduct military honors.
Joe's family wishes to extend special thanks for the kindness shared by his neighbors who often stepped in to help Joe and Adele.
His family also wishes to acknowledge the compassion and care shown to Joe by Mercy New Life Hospice. In lieu of flowers, donations in Joe's memory are greatly encouraged to Mercy New Life Hospice, 3500 Kolbe Road, Lorain, Ohio 44053. To send online condolences go to www.dovinfcs.com.

To plant memorial trees or send flowers to the family in memory of Joseph Andulics, please visit our flower store.

A candle was lit in memory of Joseph Andulics

Dear Joe, I just wanted to send you all of my sympathy in the loss of you dad. I lost my dad a few years ago and know exactly how you feel. It us such a sad time.

Deepest sympathies on your loss. Prayers to all the family. Eternal rest grant unto his soul and may the perpetual light shine upon him.Mary Jo ThomasJohn Thomas(From the old days at St.Nicholas)

My father, John Janner, was friends with Joseph from back in the Freuhauf days. I remember going to his house on Maple or Cedar Drive to get my haircut by him. It's a faded memory from long ago, but I still remember it. Rest in Peace Joe, and may your family find some peace during this difficult time.Paul Janner

Eddie, John and Michiko purchased the Beautiful in Blue for the family of Joseph Andulics. 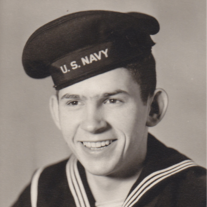