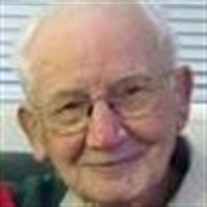 John J. Potts, 97, of Lorain, passed away Friday, March 04, 2016 at Abbewood Village, Elyria following a brief illness.
Born January 19, 1919 in Lorain, he was raised in Philadelphia, Pennsylvania, returning to Lorain in 1946 where he has lived since.
John served in the US Army during World War II with the 39th Bomber Squadron 6th Bomber Group. He received the American Defense Service Ribbon, American Theater Ribbon, Asiatic-Pacific Theater Ribbon and World War II Victory Medal.
He worked at TRW for 20 years, retiring as an inspector in 1981. Prior to that, he managed Imperial Café in Lorain, and also worked at Lorain Works US Steel. Following his retirement, John worked as a starter at Forest Hills Golf Course and also had an antique store.
He was a member of Ss. Peter & Paul Orthodox Church, Lorain, where he was also a member of the men's club. John was a member of Lorain Senior Fellowship Club and Friends of the Library.
He is survived by his daughters, Karen Crozier of Columbus and Adrienne Gray of Cleveland.
He was preceded in death by his wife of 51 years, Bartella "Bart" (nee Park) Potts in 2006; parents, Joseph and Rose (nee Lachowyn) Potocznik; and siblings, Mary Solovey, Steve Potocnik and George Potts.
The family will receive friends on Monday from 5:00 - 8:00 pm in the Dovin Funeral Home, 2701 Elyria Avenue, Lorain, where a parastas service will be held at 7:30 pm. The family will also receive friends on Tuesday from 9:30 am until the time of services at 10:00 am at Ss. Peter and Paul Orthodox Church, 2238 E. 32nd Street Lorain. Rev. Joseph McCartney pastor will officiate. Burial will follow in Elmwood Cemetery, Lorain.
In lieu of flowers, the family requests donations be made to the scholarship fund at Lorain Senior Fellowship Club, 3361 Garfield Avenue, Lorain, Ohio, 44052
To send online condolences go to www.dovinfuneralhome.com.