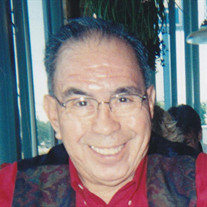 John "Diego" Martinez, 81, of Lorain, passed away Tuesday, December 6, 2016 at Mercy Regional Medical Center, Lorain, following a sudden illness.
Born June 17, 1935 in Malakoff, Texas, he moved to Lorain in 1942. Diego graduated from Lorain High School in 1955 and the served in the US Army.
He worked for Ohio Edison for 24 years, retiring in 1992. Prior to this, he worked for Lake Terminal Railroad.
He was a member of Sacred Heart Chapel, Lorain, and the Utilities Workers Union of America Local 351.
Diego had a passion for music. He was the founder and executive producer of Los Nombres music band which had become popular to Lorainites with the song "Lady Lorain". Diego had a true love for the city of Lorain, his country and the American Flag.
Surviving his sister, Mary Molina of Ft. Worth, Texas; and many nieces and nephews including his nephew and niece who he was legal guardian to, Amado Martinez of Toledo and Elena Martinez of San Diego, CA.
He was preceded in death by his parents, Nazario and Josefina "Pepita" (nee Rodgriguez) Martinez; brothers, Larry Martinez, Manuel Velasquez and Amado "Maw" Martinez; and sister, Carmen Amelia Inchaurregui.
The family will receive friends on Thursday from 3-7 pm in the Dovin Funeral Home, 2701 Elyria Avenue. The family will also receive friends on Friday from 8:30 am until the time of mass at 9:30 am at Sacred Heart Chapel, 4301 Pearl Avenue, Lorain. Rev. William Thaden, pastor will officiate. Burial will follow in Calvary Cemetery, Lorain. Full military Honors will be conducted at the cemetery. To send online condolences go to www.dovinfuneralhome.com.
To order memorial trees or send flowers to the family in memory of John Diego Martinez, please visit our flower store.