John Dan, age 95, of Lorain, passed away on Thursday, April 11, 2013, at the Ohio Veterans Home, Sandusky.
He was born on August 30, 1917, in Lorain, where he lived his entire life. He was a 1935B graduate of Lorain High School. At the age of 19, he went to work for US Steel as a crane operator for 26 years and then was a foreman in the transportation department for 17 years, finally retiring in 1980.
Mr. Dan served in the United States Army and was drafted in 1943 and served with the 202 Engineers Company C, during the European Theater. He was also in the Battle of the Bulge, with his company being instrumental in building the "Bridge" in 6 hours. He received 5 campaign medals and was finally discharged in 1945.
John was a member of the Disabled American Veterans Louis Paul Proy Chapter 20 and the AMVETS Post 47. He was also a member of the Lorain Senior Fellowship and the Patria Romana Society, where he was an officer. He held the office of the president many times and was president until the time of his illness.
He is survived by his step-son, Scott M. Singleton, of Elyria, his nephew and caregiver, Mike Lottman, and long-time family friend, James Pember.
He was preceded in death by his wife of 38 years, Mary F. Singleton Dan (nee Parker) and his dear dog, "Lottie."
Friends will be received on Sunday, April 14, 2013 from 3-6 pm, in the Dovin Funeral Home, 2701 Elyria Avenue, Lorain, where funeral services will be held on Monday, at 10:00 am. Rev. Robert Weldon, pastor of Grace Lutheran Church, Elyria will officiate. Burial will follow in Elmwood Cemetery, Lorain, where full military honors will be provided by DAV Chapter #20.

To plant memorial trees or send flowers to the family in memory of John Dan, please visit our flower store.

Uncle John was such a sweet, kind man. He will be missed. 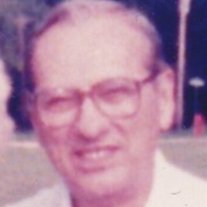