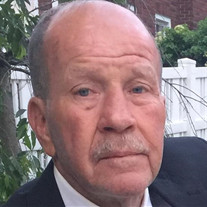 John R. Bills, 64, of Lorain, passed away peacefully at his residence on Tuesday, January 30, 2018.
Born June 14, 1953 in Goose Bay, Labrador, Canada, he moved to Sheffield in 1962. After serving in the military he lived in Boston before settling in Lorain.
John served in the United States Marine Corp stationed at Camp Lejeune during the Vietnam War.
He worked as a roofer for Coats Brothers Roofing in Elyria for 6 years. He enjoyed fishing, working in the yard and spending time with his family.
Surviving is his wife of 30 years, Sara Griffith; sons, Jayson of Massachusetts and Lee of Lorain; daughters, Jessica of North Carolina, Heather of Lorain, and Lorin of Columbus; several grandchildren and great grandchildren.
He was preceded in death by his parents, Ron and Barbara (nee Cuff) Bills; a brother, Mark; and sisters, Susan, Mary Lou and a sister at birth.
The family will receive friends on Monday from 1:00 pm until the time of military honors at 2:00 pm in the Dovin Funeral and Cremation Specialists, 2701 Elyria Avenue, Lorain. A gathering will be held Monday from 4 - 6pm at the Elks Lodge, 203 W 6th Street, Lorain.
To order memorial trees or send flowers to the family in memory of John R. Bills, please visit our flower store.