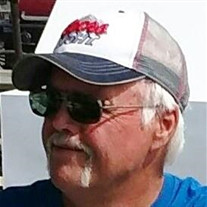 Joey Leander Lovell, 57, of Lorain, passed away Sunday, January 1, 2017 at his residence after a lengthy battle with medical issues.
Born October 6, 1959 in Amherst, he lived in Texas, Arkansas, Virginia and North Carolina before moving to Lorain in 2012. He graduated from Marion L. Steele High School in 1978 where he excelled in several sports. Joey worked various jobs in the construction trade for many years.
Joey was a member of the Fraternal Order of Eagles #1442 of Amherst. He enjoyed playing poker and pool, riding his motorcycle and boating.
Surviving is his wife of 9 years, Billie (nee Wood); his mother, Ruth Lovell and "Dad", Larry Watson of Amherst; step sons, Dan Stahl of Clayton, North Carolina, Christopher Cook and Jeremy Cook both of Mt. Pleasant, Michigan; and a step daughter, Angela Stahl of Lorain; 13 grandchildren and 2 great grandchildren; sisters, Mona Lisa (Wayne) Duvall of Hector, Arkansas and Vickie Lovell of Amherst.
He was preceded in death by his father, Leander Lovell in 1977; and his daughter, Jessica Watson in 2014.
Private services for the family will be held at a later date. The Dovin Funeral Home, 2701 Elyria Avenue, Lorain, is handling the arrangements. To send online condolences go to www.dovinfuneralhome.com.
To order memorial trees or send flowers to the family in memory of Joey L. Lovell, please visit our flower store.