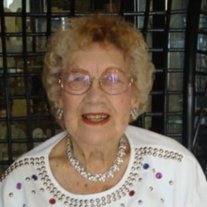 Joan M. Goohs (nee Wenrich), age 93, of Clearwater Beach, FL, formerly of Lorain, OH passed away on Thursday, May 30, 2013, at Horizon Bay Assisted Living Facility, in Clearwater, FL.
Joan was born on July 8, 1919, in Homestead, PA, and moved to Lorain at the age of three. She graduated from Lorain High School in 1937 and then graduated from the Northern Institute of Cosmetology, in Lorain. Joan also attended Lorain County Community College for Real Estate and Real Estate Law.
She worked at Smith and Gerharts and, during the war, went to work at Thew Shovel Company and The Lorain Shipyards. She and her husband, Walter were stewarts at the Lorain Saxon Club for many years. She also was a Realtor in the Lorain area. Joan was the owner and manager of Joan's Beauty Salon from 1960, until finally retiring in 1995.
Joan was an avid bowler for 41 years at The Saxon Club Lanes, The Slovak Club, and Rebmans Recreation. She was inducted into the Bowlers Hall of Fame as a "Star of Yesteryear" in 1986 and was a member of the Bowlers 600 Club. She golfed in Leagues at The Deer Track Golf Course, where she also served on many committees. Joan was a lifetime member of The Saxon Club, Branch 11, The American Slovak Club, and a member of II Century Council of Community Health Partners' Foundation. She was also a member of the United Steelworkers Golden Agers, as well as a member of the P.E.R.I, and the I.A.V. She was a Democrat precinct committee person for 13 years. Joan enjoyed dancing, traveling, cooking, and baking. She was an avid quilter and an accomplished afghan crocheter, receiving many awards for her work.
Joan is survived by her son, Robert Goohs, grandson, Marc Goohs, granddaughter, Jenee' Peters (David) and great granddaughters, Jillian Peters, Jenee' Peters II, and Jenna Peters all of Clearwater Beach, FL.
She was preceded in death by her husband of 35 years, Walter in 1976, her parents Michael and Johanna (nee Weber) Wenrich, brothers Bill and Carl Wenrich of Amherst, and her fiancé Leo Sikorsky of 27 years.
The family will receive friends on Friday, June 7, from 5-7pm, in the Dovin Funeral Home, 2701 Elyria Avenue, Lorain, where funeral services will be held on Saturday, at 11am. The Rev. Fr. Robert Glepko, Pastor of Nativity of the B.V.M. Church, will officiate. Burial will follow in Ridge Hill Memorial Park, Amherst Twp. To send an online condolence, go to www.dovinfuneralhome.com.
In lieu of flowers, condolences in her memory may be made to Suncoast Hospice, 5771 Roosevelt Boulevard, Clearwater, FL 33760.