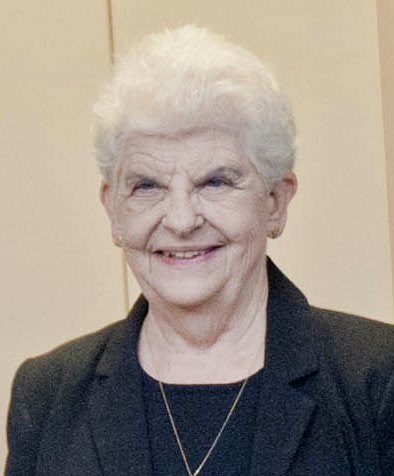 Born April 24, 1934 to Clement "Clem" and Helen (nee Emery) Walters, Jane lived in Lorain her entire life.  She graduated from Lorain High School in 1952 and went on to work for the Lorain Telephone Company and other various companies.  She retired from the City of Lorain in 1994.  In 1955 she married Richard G. Baran of Avon, Ohio whom she met while skating at the Coliseum.

She enjoyed bowling and craftwork, but above all she loved serving her community.  She was a member of the Marine Corp. League Auxiliary, Zonta, Eastern Star, The Daughters of the American Revolution, PLAV Drill Team, Lakeland Women’s Club, Mercy Foundation and was a founding member of the International Festival.  In addition, she helped with Port Fest while serving as a member of the Port Authority.  She was chairwoman of the Lorain Memorial Association and secured grave markers for six unmarked veteran graves from the 1940s and 1950s.  For her 40 years of volunteer service, Jane received the Ruth Calta Award and also received an award from the Mayor for her 60 years of service as part of the Veterans Council.

She was preceded in death by her husband of 44 years, Richard G. Baran, as well as her parents, Clement "Clem" and Helen (nee Emery) Walters.

Family will receive friends on Thursday, June 27, from 4 - 8 p.m. in the Dovin Funeral & Cremation Specialists where funeral services will be held on Friday, June 28 at 10:00 a.m.  Burial will follow at St. Mary's Cemetery, Avon.  To send online condolences, go to www.dovinfcs.com.

To order memorial trees or send flowers to the family in memory of Jane W. Baran, please visit our flower store.