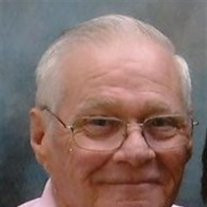 James L. Moore, age 68, of Elyria, went home to be with the Lord, on Saturday, April 27, 2013, at his home, while under the care of Cleveland Clinic Hospice.
He was born on November 1, 1944, in Pittsburgh, PA. He moved to Cleveland in 1952, then moved to Rocky River in 1960, before finally settling in Elyria in 1978. He attended John Marshall High School, but is a 1962 graduate of Rocky River High School.
James served in the United States Navy from 1962 until 1968, finally retiring his commission in 1972. He then went to work for the Elevator Constructors Local #17 for 40 years, retiring in 2003. After retirement, he drove a bus for the Lorain County Transit system for 4 years. James was a member of Sacred Heart Chapel, and enjoyed scuba diving, shooting his pistol, golfing, and traveling.
He is survived by his wife of 33 years, Zulma "Cookie" (nee Cruz), sons; Brian Allen, of Lakewood, James (Deanna) Moore, of IL, and Timothy (Leeann) Moore, of Lorain, daughters; Leona (Kenneth) Eaton, of Elyria, Christina (Lewis) Fronk, of NY, Anna (Timothy) Abbey, of NC, Michelle Mangano, of Parma, Margaret (Darryl) Sabol, of Lorain, and Daniella Lavery, of Lorain, 23 grandchildren, 15 great grandchildren, and his brother, Jerome Taylor, of Philadelphia, PA.
James was preceded in death by his parents; James Joseph and Dorothy Katherine (nee Deem) Moore, and brothers; Robert Taylor and Paul Moore.
The family will receive friends on Monday, April 29, from 2-4 and 7-9 pm, in the Dovin Funeral Home, 2701 Elyria Avenue, Lorain. Friends will also be received on Tuesday, from 9:00 am until the time of his funeral Mass at 9:30 am, at Sacred Heart Chapel, 4301 Pearl Avenue, Lorain. The Rev. Fr. William Thaden, Pastor, will officiate. Burial will follow in Resthaven Memory Gardens, Avon.

To order memorial trees or send flowers to the family in memory of James L. Moore, please visit our flower store.