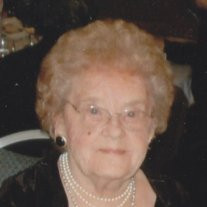 Helen Pachuta (nee Tomcho), age 96, of Lorain, fell asleep in the Lord, on Friday, August 23, 2013, at Avon Oaks Nursing Home.
She was born on August 1, 1917, in Lorain, where she lived her entire life. She was a 1935 graduate of Lorain High School, and had worked at Worthington Golf Balls, Nelson Stud Welding, Westeran Automatic Screw Co., and Mascon Toy Co.
Helen was a member of SS. Peter and Paul Russian Orthodox Church, where she was a member of the choir and St. Mary's Altar Sisterhood. She was also an expert pierogie-pincher with the Pierogie Maker group. Helen belonged to the Federated Russian Orthodox Clubs, as well as several other social clubs. She loved to dance and was affectionately known as the "Dancing Queen" within her family. She traveled extensively throughout the United States, Western and Eastern Europe, Isreal, and Egypt. She always looked forward to her trips into Czechoslovakia, especially to Bajerovce, her mother's village.
Helen is survived by her son, Craig T. (Kathy) Pachuta, of North Ridgeville, daughter, June Pachuta (David) Farris, of Chicago, IL, granddaughter, Margaret Helen Farris, of Brooklyn, NY, nieces; Darlene (Jerome) Petrykowski, Dia Dobos, Martha Naymik Vickers, nephews; Donald (Connie) Dobos and David (Kathy) Dobos, 9 grand-nieces and nephews, and 8 great grand-nieces and nephews. She is also survived by her favorite dog, "Bailey."
She was preceded in death by her husband of 54 years, George Pachuta, in 2000, sister, Margaret Dobos, brother, John Tomcho, brother-in-law, Julius Dobos, and her parents; George and Helen (nee Kundrat) Tomcho.
The family would like to express their deep gratitude to the staff at Avon Oaks Nursing Home for caring for their mother so well.
The family will receive friends on Sunday, August 25, 2013, from 4-8 pm, at SS. Peter and Paul Russian Orthodox Church, 2238 East 32nd Street, Lorain, where Parastas will be held at 7:00 pm. A Parastas, in Helen's memory, will also be held in Bajerovce. Funeral Services will be held on Monday at 10:00 am, also in the church. The Very Rev. Basil Stoyka, Pastor, will officiate. Burial will follow in Elmwood Cemetery, Lorain. The Dovin Funeral Home, 2701 Elyria Avenue, Lorain, is handling arrangements. May her memory be eternal.
In lieu of flowers, contributions may be made to SS. Peter and Paul Russian Orthodox Church, 2238 East 32nd Street, Lorain, Ohio 44055.

To order memorial trees or send flowers to the family in memory of Helen Pachuta, please visit our flower store.