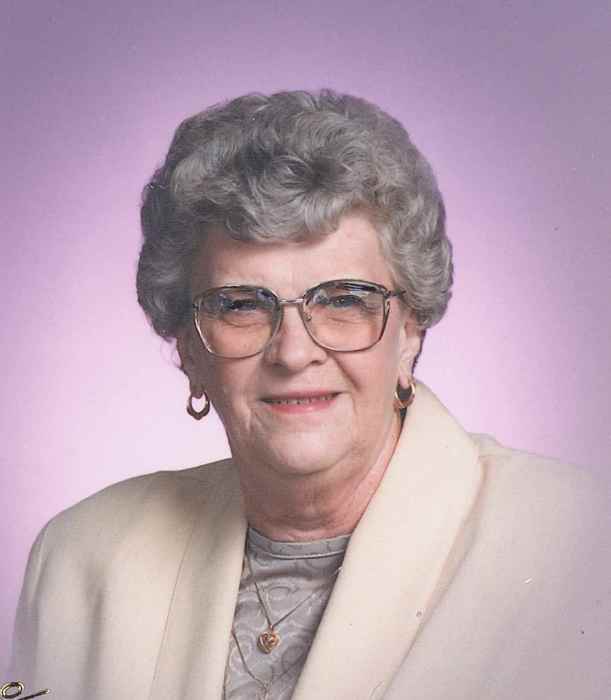 One of the Lord’s most faithful servants, Gloria Pritchett of Amherst Manor, went to join Him September 13 after 93 years of devotion. Gloria was born December 26, 1925 to Irene (nee King) and Earl Stanfield of Oberlin.

After spending her childhood in Oberlin, Gloria moved to Lorain where she made her home. After graduating from Lorain High School in 1944, Gloria joined Tower Baptist Church and started a family with her former husband Edmond. While raising three boys, Randall (deceased 1979), Gerald (Linda) and Douglas (Irma) all of Lorain, she committed herself to doing the Lord’s work through teaching Sunday school and junior church for over 45 years, working as the church’s missionary treasurer for 30 years, leading Tuesday Ladies Bible study up until several months before her death, and singing in the choir.

Although Gloria preferred feminine embellishments to both her attire and her living space, she would have just as soon picked up a hammer or saw than a spatula or recipe. Following her stint on the West Coast as a “Rosie the Riveter” during the war, Gloria immersed herself in Randy’s Boy Scout activities, carving his neckerchief slides, learning skills along with him such as camping and archery, and mentoring him through his quest for Eagle Scout status. Camping trips out west with her sons and their cousins, and family visits to archery ranges became part of the young Pritchett life. Not necessarily known as a patient woman, Gloria even took it upon herself to construct a new roof and porch on her house. There wasn’t much Gloria wouldn’t try – even technology such as Facebook.

Gloria’s work as a mother and Christian were her priorities throughout her life, but she had also held positions at various times at the family gas station, Lorain Journal, Lorain Electronics, Lorain County Community College, and All Service Rental Service.

In addition to her sons and daughters-in-law, Gloria is survived by her grandchildren Daniel (Schuyler) of Elyria, Taylor Zaborowski (Drew) and Tori Pritchett of Lorain, Ashley Rush (Greg Thompson) of Sagamore Hills, Rachel Rush of Sheffield Lake, and great-grandchildren Jacob Hilton, Abigail Bahnsen, and Colton Pritchett.

In addition to her son, Gloria was preceded in death by her brother Robert Stanfield and her parents.

In lieu of flowers, Gloria would have appreciated contributions to be sent to Tower Baptist Church, 1313 Tower Blvd., Lorain 44053.

To order memorial trees or send flowers to the family in memory of Gloria Pritchett, please visit our flower store.