Frederick A. "Killer" Kilkenny, of Lorain, went home to be with the Lord on May 24, 2014. He was born on May 9, 1943 in Columbus, Ohio, and lived in Kingwood, W. VA until he moved to Lorain as a teenager. He served in the United States Navy until his honorable discharge in 1966. After that, Fred went to work for Ford Motor Co., Lorain Assembly plant, from 1966 until retirement in 1996. Fred enjoyed fishing, bird-watching, playing cards, and spending time with his family and friends, especially his grandchildren.
He was married to Shirley (nee Schrader) for 40 years, until her death in January 2008. They had 4 children; Tina Kilkenny, Robert Kilkenny, Sandra Kilkenny, and Lori (Mike) Stempowski, all of Lorain. He is also survived by his sister, Virginia Guess, of Dothan, AL, a brother, George "Bill" Kilkenny, of Stockton, CA, grandchildren; Michael, Katie, and Nick Stempowski, all of Lorain, Jeremy (Amber) Stempowski, of Eglin AFB, Fort Walton Beach, FL, and Amber Bell, of Elyria, 1 great grandson, Lucas, and many nieces and nephews.
He was preceded in death by his wife, Shirley, father, Evert Kilkenny, mother, Ethel Fresh, stepfather, Frances Fresh, a brother, Paul, and brother-in-law, Freddie Schrader.
The family will receive friends on Tuesday, from 6-8 pm, in the Dovin Funeral Home, 2701 Elyria Avenue, Lorain. Friends will also be received on Wed., from 10:00 am, until the time of services at 11:00 am, also in the funeral home. Geneva Hetrick will officiate. Burial, with military honors, will follow at Ridge Hill Memorial Park, Amherst Twp.

To plant memorial trees or send flowers to the family in memory of Frederick Kilkenny, please visit our flower store.

A candle was lit in memory of Frederick Kilkenny

I am saddened to hear of your loss. Revelation 21:4 says "He will soon wipe out every tear from their eyes, and death will be no more, neither will mourning nor outcry nor pain be anymore. The former things have passed away." This is a beautiful hope that the Bible holds out for us. I hope this gives you some comfort in your time of loss. 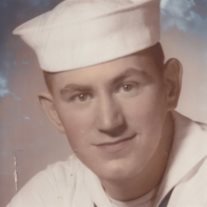