Frank C. Seskar Jr., 90, of Lorain, passed away Thursday, September 11, 2014 at New Life Hospice Residential Center, Lorain following a brief illness.
Born April 14, 1924 in Lorain, he was a life long resident of the city. Frank attended Lorain High School and served in the US Army during World War II in the Headquarter Company Battalion 326th Glider Infantry Regiment of the 13th Airborne Division. He received the American theater ribbon, European-African-Middle Eastern theater ribbon with 1 bronze star and the World War II Victory medal.
Frank worked as a foreman in the Lorain Street Department for 22 years, retiring in 1986. Prior to that, he worked at Central Bakery in Lorain as a delivery driver for 13 years.
He was a member of the Catholic Church of St. Peter, Lorain, and the former St. Stanislaus Catholic Church. He was also a member United Steelworkers Union 6621. He enjoyed riding his bicycle, hiking, driving and camping.
Surviving are his daughters, Karen Matyas, Janice Seskar and Sharon (Jack E.) Lewis all of Lorain; 2 grandchildren and 3 great grandchildren and 2 great great-grandchildren; and a sister, Louise Donat of Lorain.
He was preceded in death by his wife of 65 years, Mary A. (nee Uszak) in 2011; his parents, Frank and Louise (nee Zaletel) Seskar; his brothers, Edward in 2002 and Joseph in 1987; sisters, Dorothy Concheck in 1989 and Mary Ann Seskar in 2013.
The family will receive friends on Sunday from 4:00 - 8:00 pm in the Dovin Funeral Home, 2701 Elyria Avenue, Lorain, where closing prayers will be Monday at 9:00 am followed by mass at 9:30 am at the Catholic Church of St. Peter, 3655 Oberlin Avenue, Lorain. Rev. Craig M. Hovanec, pastor will officiate. Burial will follow in Calvary Cemetery, Lorain. The Disabled American Veterans, will conduct military honors.

To plant memorial trees or send flowers to the family in memory of Frank Seskar, please visit our flower store.

Dear Sharon, Jack and family,We were so sorry to learn of your father's passing. You are in our thoughts and prayers at this difficult time......Eternal rest grant unto him O Lord and perpetual light shine upon him. May his soul and the souls of the faithful departed rest in peace. AmenTom and Mary SpringowskiPaul Springowski 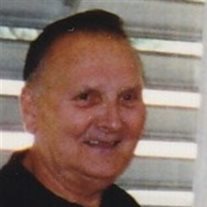