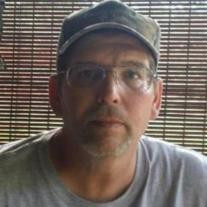 He was employed as a greens keeper for Rolling Acres Golf Course for 4 years. Prior to this he was employed at Deer Track and Echo Valley golf courses and also worked as a Exterminator.

He enjoyed golfing, sports, beach volleyball, Nascar, and fishing. He was an avid Cleveland sports fan as well as a huge fan of Ohio State University.

He is survived by his mother: Vera (nee Zaro) Darmafall of Nova, son: Matthew (Chastin) Darmafall of Elyria, grandsons Cameron and Brayden, and brothers: Joe of Nova and Michael of Lorain, and nephews Jeremy, Zachary, Sean and Michael (all of Lorain).

He was preceded in death by his father: Frank J. Darmafall in 2011.

The family will receive friends on Friday, October 19, 2012 from 5-8 pm in the Dovin Funeral Home, 2701 Elyria Avenue, Lorain. A memorial mass will be held on Saturday, October 20, 2012 at 2:00 p.m. at St. Joseph Catholic Church, 200 St. Joseph Drive, Amherst. Fr Lawrence Martello will preside. Burial will follow in Calvary Cemetery. To send online condolences, go to www.dovinfuneralhome.com.