Francisco Gonzalez, age 87, of Lorain, died on Friday, July 17, 2015 at New Life Hospice Center, Lorain, following a lengthy illness.
He was born on October 13, 1927 in Lares, Puerto Rico, moving to this area in 1954. Francisco was employed at the Lorain Ford Motor Assembly Plant as a line worker for 20 years, retiring in 1989.
He enjoyed playing the cuatro and gardening.
He is survived by his wife of 54 years, Luz Maria (nee Robles); sons, Wilfredo Gonzalez, Jose A. Gonzalez and Gilbert Gonzalez, all of Lorain; 6 grandchildren and 10 great grandchildren; brothers, Juan Gonzalez of Lorain, William Gonzalez of Chicago, Manuel Gonzalez of Utuado, Puerto Rico; and a sister; Gladys Gonzalez of Aguadilla, Puerto Rico.
He was preceded in death by his son, Francisco Gonzalez in 1979; parents, Juan and Juana Gonzalez; and his two brothers, Luis in 1965 and Antonio in 1988.
Graveside services are scheduled for Thursday, July 23, 2015 at 10:30 a.m. at Calvary Cemetery. Pastor Ymmer Cobos, of International House of Praise will officiate. The Dovin Funeral Home, 2701 Elyria Avenue, Lorain, is handling the arrangements.

To plant memorial trees or send flowers to the family in memory of Francisco Gonzalez, please visit our flower store. 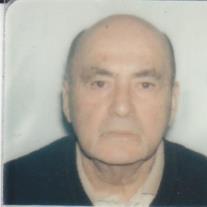