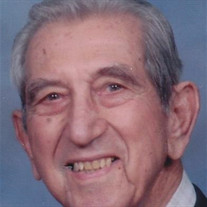 Faust D. Diso, age 98, of Lorain, passed away on Friday, November 28, 2014 at New Life Hospice Residential Center, Lorain, following a lengthy illness.
He was born on August 12, 1916 in Lorain, where he was a lifelong resident. Faust was a 1935A graduate of Lorain High School.
He was inducted into the US Army in March, 1942 and served in the 101st Airborne, 321st Glider Field Artillery. He had served in England for 9 months until D-Day. He was with the 101st Airborne Division during the invasion of Normandy, on D-Day, landing on Utah Beach, and fought through France, Holland, Belgium and Austria. He was wounded in Bastogne in December, 1944, by German Tank Fire, during the Battle of the Bulge, which was Hitler's hideout in Berchtesgaden before advancing to Austria. He received the Bronze Star, Arrowhead Pin for the D-Day invasion, Silver Star, Glider Badge with four combat stars, Presidential Citation with one oak leaf cluster, European Theater Operation Ribbon, World War II Medal, European African Eastern Campaign with four battle stars, Victory Medal, Good Conduct Medal, and the Purple Heart. He also received more recently a certificate of honor and appreciation for the French Government for participating in D-Day, the French Jubilee Medal, the French Diplome, the French Croix de Guerre, and the Netherlands Orange Lanyard.
Faust was a life member of the Italian American Veterans Post #1 for over 55 years where he served on numerous committees and offices and was Post Commander for four terms. He served as a Delegate to many State and National Conventions. He also served as a member of the IAV Post #1 Color Guard, the IAV Chairman for Flags on Oberlin Avenue, and also a member of the 101st Northern Ohio Chapter. For many years, he assisted the IAV Ladies Auxiliary Post #1 with their spaghetti dinners. As an active member of the IAV, he worked at the International Festival and was in charge of bus trips taking members to Cleveland Indians games, Thistledown Race Track and many casinos. In 2010, Faust was honored at the opening ceremonies of the Italian Festival held at the IAV for his many contributions to the Post.
He was a lifetime member of Veterans of Foreign War Post 451 and a lifetime member of Amvets Post 47. He was also a charter member of the World War II Memorial Fund and in June of 2007, Faust made the Honor Flight to see the World War II Memorial in Washington, DC. He was a member of the Military Order of the Purple Heart. In 1996, he was named Veteran of the Year by the City Council of Lorain. At the present time he was a delegate to Lorain Veterans Council.
Faust was a member of the National Association of Retired Federal Employees, the American Association of the Retired Persons Chapter 399, and was a Gold Card member of the National Association of Letter Carriers Branch 583. He belonged to the Purple Heart Chapter 473 and was a member of the 14th Street Gang of Lorain.
Faust was a member of the former St. Stanislaus Parish where he held offices with the Holy Name Society and worked with the Boy Scouts and Cub Scouts. He was a commentator, church councilman, and usher. As a parishioner, Faust helped out at all parish picnics, the annual Holy Name Pancake Breakfasts, and set up the outdoor Christmas Manger. He collected for Catholic Charities and worked Bingo for many years. He was currently a member of the Church of St. Peter, Lorain.
He coached C.Y.O basketball and Y.M.C.A. and City League baseball for a number of years. He enjoyed golfing, bowling, gardening, and dancing. For many years he played softball in the City League, and bowled in the IAV League and Senior Fellowship League. In 1998, he made a Hole in One on the ninth hole at Emerald Valley Golf Course. Faust was a regular supporter of the Lorain Palace Theater.
He worked at the American Stove Co., the National Tube Co. and retired in 1979 from the US Post Office in South Lorain, after 38 years of service. He was also a Real Estate Salesman for 27 years.
He is survived by his wife, Eleanor (nee Kryc), whom he married in October of 1950; his three sons, Bruce (Patti) of Lorain, Richard of Lewis Center, OH and Mark (Janet) of Lorain; a daughter, Diane (Michael) Jaffe of New Town, PA; grandchildren, Samantha, Sara, Jacqueline, Robert, Joshua and Jeanine; 4 great grandchildren; and many nieces and nephews.
He was preceded in death by his parents, Domenic in 1961 and Florence (nee Caserta) Diso in 1966; a son, Gary in 1958; a brother, Clarence in 1978; and a sister, Margaret Belekanic in 1995.
The family will receive friends on Tuesday from 4-8 pm in the Dovin Funeral Home, 2701 Elyria Avenue, Lorain. Funeral services will be held on Wednesday at 10:30 am in the funeral home followed by a mass at 11:00 am at the Church of St. Peter, 4301 Oberlin Avenue, Lorain. Burial will follow in Calvary Cemetery. The Italian American Veterans Post 1 and Veterans of Foreign War Post 451 will conduct military honors.
To send online condolences, go to www.dovinfuneralhome.com.