Evelyndale Kern (nee Alspach), age 93, of West Salem, passed away peacefully on December 16, 2016, at the Burbank Parke Care Center while under the care of Crossroads Hospice.

She was born on July 3, 1923 in Marion, Ohio. She lived in Lorain for a large part of her life and moved to Avon in 2001, and finally moved to West Salem to live with her daughter, Rosanna.

Evelyndale was a member of Lorain Baptist Church and she enjoyed gardening, hunting, fishing, and boating. She also crocheted a lot and was a fitness fanatic.

The family will receive friends on Tuesday, December 27, from 4 - 7 pm, in the Dovin Funeral Home, 2701 Elyria Avenue, Lorain. Services will be held on Wednesday, at 11:00 am, also in the funeral home. The Rev. Dempsey Miller, Pastor of Lorain Baptist Church, will officiate. Burial will follow in Ridge Hill Memorial Park, Amherst.

To plant memorial trees or send flowers to the family in memory of Evelyndale Kern, please visit our flower store.

Was so sorry to hear of your loss. Al and I will have you in our prayers and thoughts.Annette Wayman

Dianna and Larry Our Condolence is with you and your Family and will keep you in our Prayers. Victor and Lois Payne

A candle was lit in memory of Evelyndale Kern 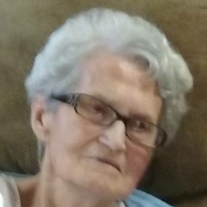