Eustacio C. "Louie" Ruiz, 85 of Bayamon, Puerto Rico, passed away Sunday, September 7, 2014 at Hermanos Melendez Hospital in Bayamon, following a short illness.
Born March 1, 1929 in San Juan, Puerto Rico, he came to Lorain in 1946 where he lived until moving back to Puerto Rico in 2011.
Louie worked for Lorain Works US Steel as a crane operator for 36 years, retiring in 1986. He was a member of the United Steel Workers Union Local 1104 and enjoyed gardening, traveling and spending time with his family and friends especially his grandchildren and great grandchildren. Louie was a great and kind man always willing to help anyone and do anything for anyone that he could.
Surviving is his daughter, Brenda Brannon of Sheffield Lake; sons, James Lusk Sr. of Vermilion, and Charles Johnson of Lorain; a daughter-in-law, Marsha Cassleman of Lorain; grandchildren, Richard Gills Jr. of Lorain , Michael Brannon of San Jose , CA , Tim Brannon Jr. and Steven Brannon both of Sheffield Lake, Kristina and Megan Lusk both of Vermilion, and Crystal Irish of Wakeman; great grandchildren, Richard Gills III, Timothy Brannon III and Abigail Gills; he also considered Charles Jr., Kenneth, Richard, Christopher, James, Travis Johnson and James Lusk Jr. grandchildren; 16 brothers and 2 sisters and numerous other family members.
He was preceded in death by his wife of 47 years, Helen (nee Lusk) in 2008; his parents Salvador Concepcion Guzman and Leonor Ruiz Figueroa; a son Richard Gills Sr.; a daughter, Linda Frame; several siblings; and a grandson, Richard McCoy.
The family will receive friends on Saturday, September 13, 2014 from 1:00 pm until the time of funeral services at 4:00 pm in the Dovin Funeral Home, 2701 Elyria Avenue, Lorain. Rev. Mary Adkins will officiate. Burial will take place privately in Ridge Hill Memorial Park, Amherst Twp.
The family is requesting that donations be made to the funeral home.
To send online condolences go to www.dovinfuneralhome.com.

To plant memorial trees or send flowers to the family in memory of Eustacio Ruiz, please visit our flower store.

I am so sorry to hear about the passing of your dear love one. I have also experienced the loss of loved ones and what helped me and many others to cope is our heavenly father God (Psalms 83:18) who is the "Father of tender mercies and God of all comfort who comforts us in all our trials". 2 Corinthians 1:3&4 The bible also gives us a marvelous hope for the future and tells us that soon will bring an end to suffering and death. I sincerely hope these words will be comforting to you.

Louie, you will be missed, you touched everyone's life you were involved with. Prayers out to Brenda, Michael, Timmy, Steven and family....sincerely Tim brannon 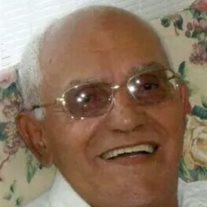