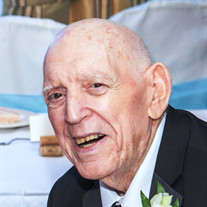 Eusebio P. DiLuciano, 88 of Lorain, passed away Saturday, April 4, 2015 at his home surrounded by his family while under the care of New Life Hospice following a lengthy illness.
Born Nov. 24, 1926 in Lorain, he was a life long resident of Lorain. Eusebio was a 1945 graduate of Lorain High School and served in the US Army during the Korean War. While in the service he was employed as a cook for the officers. He earned the Korean Service Medal with 2 Bronze stars, Combat Infantry Badge and UN Service Medal.
Eusebio worked at Lorain Works US Steel for 40 years in the carpenter shop retiring as the foreman in Central Labor in 1983.
He was a member of St. Frances Cabrini Parish, Lorain, and the Italian American Veterans Post 1. He enjoyed gardening, carpentry, watching baseball and Ohio State Football with his wife and grandson and playing poker with his family.
Surviving is his daughter, Cynthia Davis of Lorain; grandson, Paul Davis and granddaughter in law Maddie Davis of Cleveland; brothers, Alfred (Louisa) DiLuciano of Lorain, Anthony (Jean) DiLuciano of Elyria, Frank DiLuciano of Lorain, John DiLuciano and Jim DiLuciano both of Sheffield Village; sisters, Rose DeAngelis and Anne (Jack) Tocchi both of Lorain, and Virginia (Gene) Bulso of Seffner, Florida; sister in laws, Simie DiLuciano, Elaine (Arnold) Nehenke and Katherine Kobasic; and many nieces and nephews.
He was preceded in death by his wife of 60 years, Evelyn (nee Kobasic) in 2014; parents, Antonio and Santarella DiLuciano; a brother, Dominic "Red" DiLuciano; mother and father in law, Martin and Anne Kobasic; brother in laws, Frank DeAngelis, Martin Kobasic, Edward Kobasic, John Kobasic, Robert Kobasic and Donald Simko; sisters in law, MaryAnn Simko, Dorothy Kobasic, Stella Kobasic and Margaret Kobasic.
The family will receive friends on Friday from 9:00 am until the time of funeral services at 10:30 am in the Dovin Funeral Home, 2701 Elyria Avenue, Lorain. Mass will follow at 11:00 at St. Frances Cabrini Parish, 2143 Homewood Drive, Lorain. Rev. John C. Retar, pastor will officiate. Burial will follow in Calvary Cemetery, Lorain. The Italian American Veterans Post 1 will conduct military honors.
Contributions can be made to the Valor Home Lorain County, 221 W. 21st Street, Box 4, Lorain, Ohio 44052.
To send online condolences, go to www.dovinfuneralhome.com.

To order memorial trees or send flowers to the family in memory of Eusebio P. DiLuciano, please visit our flower store.