Ethel F. Pfeifer (nee Toth), 97 of Lorain, passed away peacefully March 11, 2016 surrounded by many who loved her.
Ethel was born in Sheffield on January 20, 1919. She was one of ten children born to thwe late Hungarian immigrants John K. and Esther (nee Takacs) Toth. She attended local schools and graduated from Clearview High in 1937.
On July 4, 1941 she was united in marriage to James H. Pfeifer at St. Ladislaus Catholic Church in Lorain. Ethel was one of many who stayed at home with her baby, as her husband fought overseas during World War II. They celebrated 62 years of marriage before Jim passed on December 27, 1999.
She was mother to four sons, James (deceased), Thomas of Oberlin, Gerald of Wisconsin and Paul of California. Ethel was a grandmother to eight and a great grandmother to ten.
Ethel will be most remembered for her enjoyment of the simple things in life and nurturing and caring for those around her. She was a wonderful hostess and enjoyed setting a beautiful table for friends and family. Nothing delighted her more than sunsets, her roses and watching the birds.
Ethel was employed by the Hills Department Store for many years. She and Jim were very active members of St. John Roman Catholic Church as well as involved members of Al Anon. She enjoyed following politics, the Cleveland Indians and golf.
Ethel was preceded in death by her husband and son; two brothers, four sisters and two grandchildren.
The Pfeifer family will be forever indebted to the management and staff of Avon Oaks A Caring Community for 8 plus years of high quality living.
Friends will be received at Saint Frances Xavier Cabrini Catholic Church at the corner of St Rt 57 and Homewood Drive in Lorain on Tuesday from 10 am until the time of mass at 11 am. Rev. John C. Retar, pastor will officiate. Burial will follow in Calvary Cemetery, Lorain. The Dovin Funeral Home, 2701 Elyria Avenue, Lorain, is handling the arrangements.
In lieu of flowers, contributions can be made to a charity of the donor's choice. To send online condolences go to www.dovinfuneralhome.com

To plant memorial trees or send flowers to the family in memory of Ethel Pfeifer, please visit our flower store.

My high school friend, Julie, sent me word of your Mother's passing. I am sorry to say that I lost contact with Mrs. P after leaving Lorain in 1968. In Lorain, I lived about 1 block from the Pfeifer family. I actually took over Jim's paper route when he broke his hip. Jim and I also worked together at St. Joseph hospital and at National Pharmacy.I remember your mothers smile and uplifting voice. I can remember her voice as she worked with my mom to keep Jim and me on as straight a path as 2 teenage could be kept.97 years--what a blessing!!Jack Martinosky

Dear Annette, Thank you so much for letting me know Ethel has passed on. I really appreciate it. I was a close friend of Ethel's son Jim in high school. When Jim was at the Welcome nursing home, my mother was also there. So I would visit both of them. Then when Ethel went off to Avon Oaks I visited her there, whenever I got to Lorain. I live in Georgia. i would keep in touch with Ethel with notes and she would call me when she received one. This went on for a long time. She did seem happy because of her loving family and the good care she received at Avon oaks. Other than Jim, I did not know any of her family but you all were so loved by Ethel. She talked about all of you and when she did her eyes sparkled with joy. I will forever keep her in my thoughts and prayers.I offer my sincere condolences to you her loving family. Julianna Souch Ramsey

Share a memory of Ethel F. Pfeifer or send condolences to the family.

I had the pleasure of being one of the communion crew from St. Mary's in Avon who often took communion to Ethel and attend mass with her. We enjoyed visiting with and talking with her. We shall keep her and your entire family in our prayers. Nancy Shullick Danese (Avon)

I will miss you my friend. Your smile and laugh. And your love. My prayers for your family. 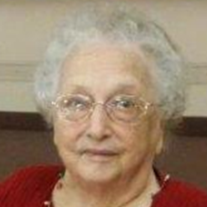