Esperanza C. "Espie" Delgado (nee Cintron), age 92, passed away on Wednesday, July 24, 2013, at her daughter's home in Toledo, OH, after a brief illness.
She was born on May 14, 1921 in Yabucoa, Puerto Rico and had lived in New York also before moving to Lorain in 1951. She was a housekeeper at St. Joseph Hospital for 14 years, before retiring in 1990. She was a member of Sacred Heart Chapel, where she was also a member of the Cursillo Movement. In Toledo, she was a member of St. Martin de Porres Church. Espie enjoyed sewing and playing Bingo.
She is survived by her sons; Raymond (Chris) Delgado, Jr., David (Judy) Delgado, and Jose (Lucille) Delgado, all of Lorain, daughters; Freida (Roberto) Colon, of Coamo, PR, Judith (Benny) Rivera, of Lorain, and Gladys Delgado Ofori-Atta, of Toledo, many grandchildren and great grandchildren, a brother, Oterro Cintron Medina, of Bayamon, PR, and a sister, Dimas Cintron Medina (Zenkewich), of NJ.
She was preceded in death by her husband of 47 years, Ramon Delgado Ramos, in 1998, her parents; Fermin and Juana (nee Ortiz) Cintron, brothers; Juan Cintron, Susano Cintron, Thomas Cintron, Antonio Cintron Medina, Francisco Cintron, Guillermo Cintron, Mario Cintron Medina, and Angel Cintron Medina, and her sisters; Tomasita Cintron, Maria Martinez, and Julia Delgado.
The family will receive friends on Sunday, July 28, 2013, from 7 - 9 pm, in the Dovin Funeral Home, 2701 Elyria Avenue, Lorain, OH, where services will be held on Monday, at 11:00 am. Burial will follow in Calvary Cemetery, Lorain.

To plant memorial trees or send flowers to the family in memory of Esperanza Delgado, please visit our flower store.

I spent most of my childhood at her home, and eat dinner with her family practically every day. Mrs. Delgado has a special place in my heart. My family and I will miss her. Mario C. Atkinson 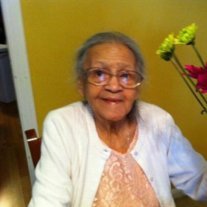