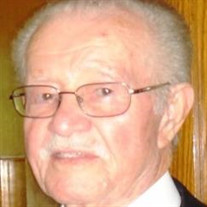 Enrique Otero, 90, of Lorain, passed away Friday, March 6, 2015 at his residence.
Born July 15, 1924 in Barceloneta, Puerto Rico, he came to Lorain 63 years ago.
Enrique worked as an assembler at Ford Motor Company Cleveland Engine Plant for 26 years, retiring in 1978.
He was a member of Templo Bethel, where he served as president of the Men's Fellowship Group for 3 years. He was also a member of the United Autoworkers Union Local 1250.
Enrique was a handyman and enjoyed gardening and socializing with people in hospitals and nursing homes.
Surviving are his sons, Henry "Rico" Otero Jr., of Lorain, John (Jennifer) Otero of Wickliffe, Noel (Linda) Otero of Lorain, and Wilfredo "Red" (Tracy) Otero of South Amherst; daughters, Rita Otero of Elyria, Elena "Helen" (Luis) Acosta, Betty (Michael) Delgado and Nancy (Nelson) Otero-Cruz all of Lorain; 13 grandchildren and 10 great grandchildren; a brother, Juan Antonio Otero of Barceloneta, Puerto Rico; sisters, Elena Roman and Fernanda (Gilberto) Santana both of Barceloneta, Puerto Rico.
He was preceded in death by his wife of 42 years, Modesta (nee Santiago) in 2002; his parents Rafael Otero in 1973 and Petra Deliz in 1976; brothers, Miguel Otero and Felix Otero; a sister, Petra Otero; and a granddaughter, Tabitha Rae Otero.
The family will receive friends on Friday from 6:00 - 9:00 pm at "Iglesia Templo" Bethel, 1829 E. 31st Street, Lorain, where the family will also receive friends on Saturday from 10:00 am until the time of funeral services at 11:00 am. Rev. Carlos Caraballo, pastor, will officiate. Burial will follow in Ridge Hill Memorial Park, Amherst Twp. In lieu of flowers, contributions can be made to the funeral home. The Dovin Funeral Home, 2701 Elyria Avenue, Lorain is handling the arrangements.
To send online condolences go to www.dovinfuneralhome.com
To order memorial trees or send flowers to the family in memory of Enrique Otero, please visit our flower store.