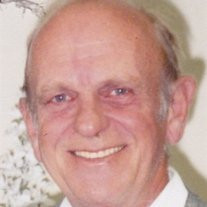 Edward "Johnny" Johnson, 70, of Lorain, passed away Thursday, April 4, 2013 at Autumn Aegis Retirement Community following a short illness.
Born May 16, 1942 in Dudley, Mass., he lived in Norfolk, Va., before coming to Lorain in 1963.
He served in the US Navy, and worked for the Lorain Ford Assembly Plant as an assembler.
Johnny did a lot of volunteer work for Lorain Head Start and the food bank at First Evangelical Lutheran Church, Lorain.
He enjoyed walking, playing cards and spending time with his grandchildren.
Surviving is his wife 50 years, Kristy (nee Fernandez); a son, Edward R. Johnson of Lorain; daughters, Rebecca (Jeff Fraley) Johnson of Lorain and Doris (Maurice) Barnett of Lorain; grandchildren, Joshua (Paris), Jeffrey, Nathan, and Jessica; a brother, Hank; and a sister, Marian Hunt of Spring Hill, Florida.
He was preceded in death by his parents, Edward C. Dorothy (nee Scott) Johnson.
The family will receive friends on Saturday from 12:00 pm until the time of funeral services at 4:00 pm at The Church of Jesus Christ Restored Gospel, 2655 Broadway Avenue, Lorain. Brother Frank Palacios, will officiate. The Dovin Funeral Home, 2701 Elyria Avenue, Lorain, is handling the arrangements.
To order memorial trees or send flowers to the family in memory of Edward "Johnny" Johnson, please visit our flower store.