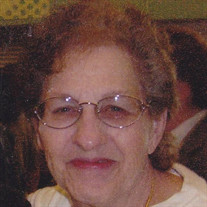 Edna Kathryn Redd (nee Martin), 82, of Lorain, passed away peacefully on Sunday, November 6, 2016 at Westlake Rehab & Nursing Center following a lengthy illness.
Born December 10, 1933 in Logan, Ohio, she moved to Lorain in 1966 where she has lived since.
Edna worked at TN Molas & Sons, Lorain, for 16 years, retiring in 1995. She enjoyed watching television, listening to country music, playing badminton and spending time with her grandchildren.
Surviving are her daughters, Betty (Jeffery) Burnette, Jenny (Edward) Alves and Joyce (Richard Edwards) Athanas all of Lorain; 7 grandchildren and 4 great grandchildren; brothers, Lester Martin and Rudy Martin both of Logan, Ohio.
She was preceded in death by her husband, Earl in 2000; and her companion, Carlos Collins in 1992; parents, Silas and Marjorie (nee Williams) Martin; brothers, Ben, Bill, Leonard and Richard; and sisters, Evelyn Teal and Marge DeNune.
The family will receive friends on Tuesday from 4:00 until the time of services at 5:30 pm in the Dovin Funeral Home, 2701 Elyria Lorain. Jeffery Burnette, Edna's son-in-law will officiate. To send online condolences go to www.dovinfuneralhome.com.
To order memorial trees or send flowers to the family in memory of Edna K. Redd, please visit our flower store.