Dimitri "Jim" Stanchak, 85, of Sheffield Township, passed away Friday, November 13, 2015 at New Life Hospice Residential Center, Lorain, following a lingering illness.
Born April 9, 1930 in Poland, he came to Connecticut in 1949 and soon after he settled in Lorain.
Jim worked in the #2 Lap at Lorain Works US Steel for 38 years, retiring in 1986.
He was a member of St. John the Baptist Ukrainian Catholic Church, Lorain, and the United Steel Workers Union Local 1104.
He enjoyed gardening, dancing and traveling.
Surviving is his wife of 62 years, Roberta (nee Zech); sons, James R. Stanchak of Lorain, Robert R. (Barb) Stanchak of Sheffield Township and Donald W. Stanchak of Hilton Head, South Carolina; a daughter, Patricia (Walt) Koziura of Sheffield Township; 9 grandchildren and 6 great grandchildren; and a sister, Stefania Rewak of Lorain.
He was preceded in death by his son, Michael in 1966; a daughter, Stephanie Stanchak in 2005; his parents, Michael and Rose (nee Szmajda) Stanchak; brothers, John, Steve, Bill and Peter; and a sister, Anna Pechowich.
The family will receive friends on Monday from 2-4 and 7-9 pm in the Dovin Funeral Home, 2701 Elyria Avenue, Lorain, where a Panachida service scheduled for 7:00 pm. Funeral services will be Tuesday at 9:30 am in the funeral home followed by Divine Liturgy at 10:00 am at St. John the Baptist Ukrainian Catholic Church, 3038 Charleston Avenue, Lorain. Very Reverend Canon Steven M. Paliwoda, pastor will officiate. Burial will follow in Calvary Cemetery, Lorain.
To send online condolences go to www.dovinfuneralhome.com.

To plant memorial trees or send flowers to the family in memory of Dimitri Stanchak, please visit our flower store.

Extending Deep And Heartfelt Sympathy To The Whole Family...

A candle was lit in memory of Dimitri Stanchak

I'm so sorry for your loss. Your in my thoughts and prayers. Barb Grasse Leiby 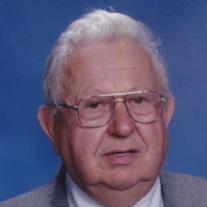