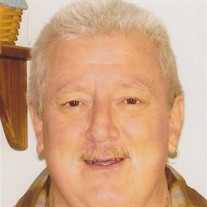 David A. Szabo, 61 of Lorain, passed away Monday, December 7, 2015 at the Cleveland Clinic, Cleveland, following a lengthy illness.
Born September 10, 1954 in Lorain, he lived in Lorain his entire life. He was a 1972 graduate of Lorain High School.
David retired in 2001 from Lorain Products in Lorain, where he worked as a electronic technician. Prior to that, he worked at Lake Terminal Railroad.
He was a member of St. Anthony of Padua Catholic Church, Lorain, where he was President of the St. Anthony's Athletic Council and very active in the CYO sports. David coached basketball and football at St. Anthony for many years. He also started the St. Anthony Junior Hoops program. He was also very active in Lorain Youth Baseball, having coached for many years. David served as past president of the Lorain Youth Baseball organization and in 1985 he started the T-Ball program. He was recognized by the Lorain Sports Hall of Fame for his dedication to Lorain Youth Baseball.
David enjoyed playing softball, but his true passion was coaching and helping kids in any way he could. He truly dedicated all of his spare time to coaching and mentoring Lorain's youth. David was a member of the Studebaker Club and loved his Studebaker Cars.
Surviving is his sons, David A. (Melanie) Szabo II of Amherst and Richard (Yolanda) Szabo of North Dallas, Texas; a daughter, Victoria (Kris) Wacholz of Lorain; grandchildren, Megan Szabo, Jenna Szabo, Jacob Szabo, Richard Aaron Szabo, Alexzys Szabo, Xzavier Szabo, Mason Szabo, Lee Baker, Jessica Baker and Joseph Wacholz; a brother, Eugene "Mickey" Szabo of Ashtabula; and sisters, Deborah (Michael) Schue and Karen (Clayton) Dugan both of Lorain, several nieces and nephews and companion Dolores Gonzalez of Lorain.
He was preceded in death by his parents, Eugene in 1994 and Joann (nee Strauser) Szabo in 2001.
The family will receive friends on Sunday from 2:00 - 4:00 pm and 6:00 - 9:00 pm in the Dovin Funeral Home, 2701 Elyria Avenue, Lorain, where funeral services will be Monday at 9:30 am followed by mass at 10:00 am at St. Anthony of Padua Catholic Church, 1305 E. Erie Avenue, Lorain. Rev. Richard E. Hudak, pastor will officiate.
In lieu of flowers, the family requests donations be made to the St. Anthony Athletic Council, 1305 E. Erie Avenue, Lorain, Ohio 44052.
To send online condolences go to www.dovinfuneralhome.com.