David H. Gibson, 65, of Lakewood, passed away peacefully surrounded by his family at St. Vincent Charity Medical Center following a lengthy illness.
Born December 12, 1952 to Wilbert and Mary (nee Baker) Gibson, David lived in Lakewood his entire life. He attended Lakewood High School and went on to work for the City of Lakewood. In November of 1977, David married the love of his life Elaine and the two shared 40, "mostly" blissful years of marriage. Together they had three beautiful daughters, Marlene, Joanne and Tracy, all of whom David cherished. He loved his family and was devoted husband, father, Papa and Great Papa.
David loved to bowl, so much that he had to "tone it down a little" to ensure wedded-bliss according to his wife. The two competed in many couple's leagues and won numerous trophies. During his free time, David enjoyed working on model cars. He also enjoyed fishing and despite his illness hoped to take his grandson out fishing this summer. Like any person from Cleveland, David had a love-hate relationship with the Cleveland Browns, hoping that one day they may get their act together. He loved watching the Cavaliers and was able to enjoy their recent efforts in the current playoff rounds.
Despite several obstacles, David persevered and maintained a positive outlook on life. He was a jack of all trades and eager to take on new tasks. There was nothing that was going to stand in his way once he set his mind to it.
He is survived by his loving wife of 40 years Elaine Gibson (nee Novotny); daughters, Marlene Gibson, Joanne (Gil) Ramirez, and Tracy (David) Geer; 11 grandchildren and 4 great grandchildren; brother, Robert; sisters, Jeannie and Mary Pat, as well as several nieces and nephews.
David was preceded in death by his parents; grandson, Dylan Gibson; brothers, Charles and Michael and sister, Carol.
A funeral service will be held on Thursday at 10:00 A.M. at Gethsemane Lutheran Church, 14560 Madison Avenue, Lakewood, Ohio. Pastor Michael Wallace will officiate.

To plant memorial trees or send flowers to the family in memory of David Gibson, please visit our flower store.

my favorite memmory was when we spent time togather and i went to the store for stuff u need and u helped me out with your beautifull grand child destiny and i miss when i used.to bring her over and u would play with her.laugh smile help me out with her and have fun together i miss the memmorys we had together rip grandpa u will be missed

One of my greatest memories of my father was Thanksgiving Eve, breaking the bread for good famous homemade stuffing. Waking up on Thanksgiving day to the smell of his turkey in the oven and watching the parade together while we waited for the food to be done so we can feast.

David Gibson was the greatest man I have ever known & the best dad I could have asked for. My favorite memory is us building my dollhouse together, which is being passed down to my daughter, his youngest grandchild. RIP Daddy. I'll always love you 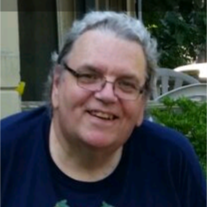